Knicks: Surprise point guard has caught the eye of Tom Thibodeau, could be first round pick 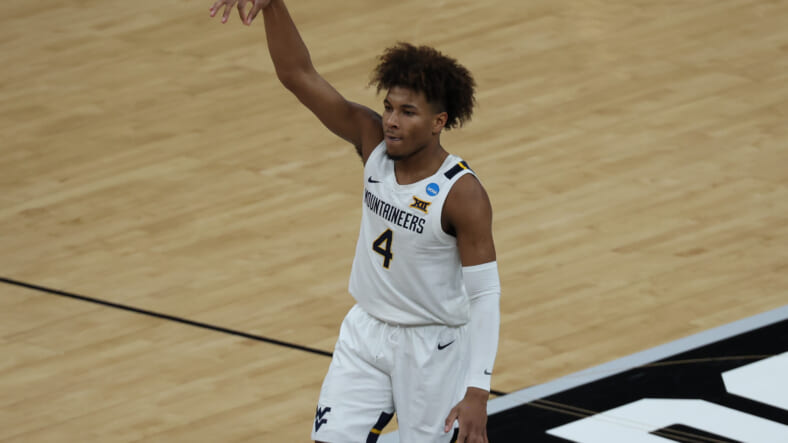 The Knicks are reportedly trying to trade up in the NBA draft on Thursday but have failed to find a partner willing to move out of the lottery. With targets like Chris Duarte and Davion Mitchell likely to be off the board by the 19th overall pick, the Knicks could shift their attention to one late first-round prospect, Miles McBride.

Marc Berman of The Post stated on Tuesday that Tom Thibodeau has an eye on Miles McBride of West Virginia as a target at the back-end of the first round:

According to one league source, Knicks coach Tom Thibodeau was pushing for West Virginia sophomore point guard Miles McBride, who has been projected in some mocks as an early second-round or late first-round pick. Itâ€™s unclear at which slot Thibodeau would prefer to select McBride â€” No. 19 or 21 in the first round, or No. 32 early in the second round â€” but the 20-year-old impressed him in his Knicks workout.

McBride is an intriguing player who averaged 15.9 points, 4.8 assists, and shot 43% from the field last year. From three, he connected on 41% over 3.8 attempts. One statistic that really stands out is his steals, averaging 1.9 per game. Playing 34.2 minutes per game, McBride is a low-key point guard prospect who could develop nicely behind an established veteran next season.

There is a possibility that McBride is selected with the 19th pick, if not 21, depending on how the Knicks operate regarding a trade. At 6’2″ with a 6-foot, 9-inch wingspan, McBride has the biggest hands of any guard in the draft.

One of McBrideâ€™s top strengths is defense, using quick hands and superior athleticism to cut passing lanes and poke the ball free from handlers. He likely fits the bill perfectly for Tom Thibodeau, who prefers defensive-minded players with offensive upside. One category that McBride needs to improve and is his court vision — he’s a bit raw as a PG but has the tools to develop nicely if given the opportunity.