Knicks should make big shift at point guard against Nets 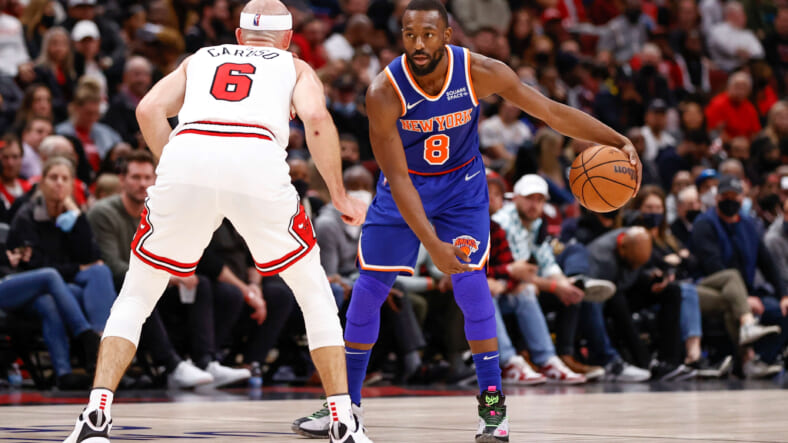 The New York Knicks need more firepower on offense to start games, especially with the inconsistencies of Kemba Walker and Derrick Rose currently dealing with an ankle injury. Walker has struggled to open the year with his new team, averaging 11.7 points, a career-low over 24.5 minutes. Walker may be hitting 41.3% from downtown this season, but in the month of February, heâ€™s connected on just 29.6%.

Ultimately, when Walker isnâ€™t producing on offense, heâ€™s virtually useless. Considering his defensive game-plan is entirely reliant on drawing charging fouls, Kemba’s value plummets the second heâ€™s not knocking down shots at an efficient rate. However, second-year guard Immanuel Quickley has become one of the team’s better on-ball defenders, utilizing aggression and shiftiness to create bad shot opportunities for opponents.

Quickley has been a well-rounded player this season, averaging 9.3 points and shooting 36.6% from deep on the year. However, in November, heâ€™s hit 40.8% of his shots from three and 44.2% from the field. In fact, heâ€™s recorded double-digit points four times in his last five games, making a significant impact not just as a score, but as a facilitator.

The Kentucky product posted seven assists in the most recent win over Atlanta, showcasing his vision, especially in transition. The argument revolves around Walker losing starting minutes in favor of Quickley, but head coach Tom Thibodeau may not want to disrupt his chemistry with Obi Toppin, who features primarily on the second team.

Separating Quickley from Toppin may be a poor move, but having him develop chemistry with Julius Randle may be more beneficial for the team’s production in the first half. The starting five have struggled so badly at times this year, the second team has been forced to supplement deficiencies, which is not a sustainable strategy.

Some might argue that Walker sitting out against Atlanta gave the Knicks an advantage, as Alec Burks filled his spot with the starting five. Burks had an incredible performance, posting 23 points and seven rebounds over 39 minutes. The starting team as a whole actually performed better, as Evan Fournier contributed 20 points and RJ Barrett 15. It is starting to become obvious that Walker is holding back the squad from reaching their potential, due to a lack of poor facilitation and shot selection.

Against a Brooklyn Nets team that is known for its offensive prowess, they need to start off strong, which may promote Quickley earning more minutes to open the game over Walker.