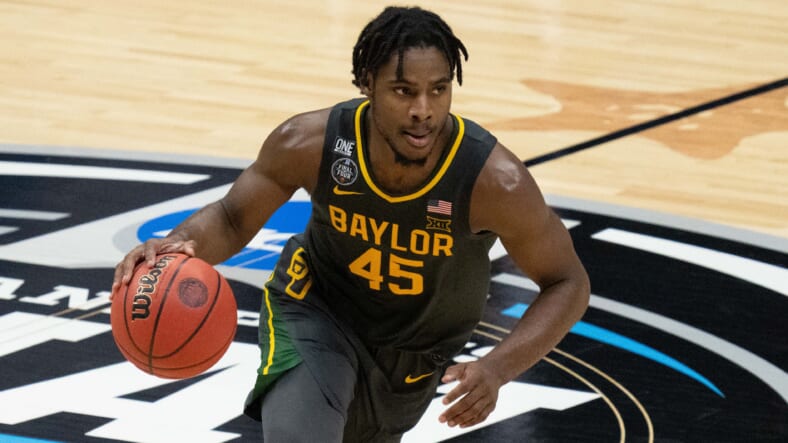 In less than 24 hours, the New York Knicks will know the future of their draft selections. With the 19, 21, and 32nd overall picks in the first round, reports have heavily indicated the front office is trying to move up. They haven’t been able to find any suitors.

After gauging Golden State’s interest in moving back to 19 from the 14th overall pack, the Knicks have now shifted their attention to the Indiana Pacers at 13.

According to Marc Berman of the NY Post, the Knicks have contacted the Pacers at 13 to gauge interest in a trade back:

According to NBA sources, the Knicks have talked not just to Golden State about moving up, but also to the Pacers, who have the 13th pick. The Knicks are trying to package their two first-round picks but may also have to add more draft capital (they have a total of 20 picks through 2026).

President Leon Rose and the executives have two players in mind, Davion Mitchell out of Baylor and Chris Duarte out of Oregon.

Mitchell is a combo guard who offers elite defense right out of the gate. Having won an NCAA Championship and experienced a positive increase in offensive production this past season, averaging 14.0 points and 5.5 assists, Mitchell would fit the bill perfectly as a developmental point guard behind a veteran.

Mitchell connected on 51% of his shots from the field and 44% from range over 4.7 attempts per game. He is a refined defensive player, something that Thibodeau values significantly in young talent. However, he also contains the ability to score with aggression and shoot adequately.

Duarte is a bit different, offering his services as a shooting guard. He is an ideal 3-and-D player, someone who can replace Reggie Bullock, who is preparing to leave in free agency. Duarte averaged 17.1 points and shot 53% from the field with Oregon this past season. His most impressive statistic, though, was his 42% success rate from three, averaging 5.5 attempts per game.

With these two names in mind, the Knicks are desperately trying to find a trade partner, and it will likely boil down to the final moments. Alternative clubs know that New York is desperate, as they simply canâ€™t host four rookies. They are likely trying to extract as much value as possible.