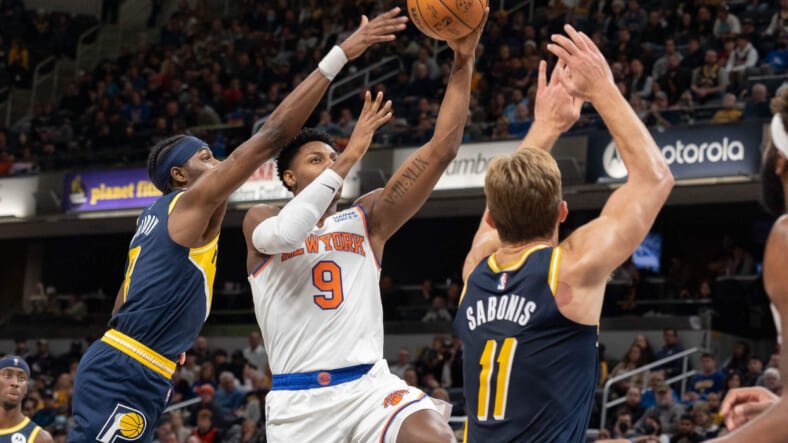 The New York Knicks mustered a moment of brilliance against the Milwaukee Bucks on Friday evening, showing grit and resiliency to overcome a 21-point deficit and emerge victorious with a 15-point cushion.

Without effort and confidence, the Knicks would’ve been dead in the water against the reigning champions, but this new squad full of leaders and motivators didn’t go quietly into the night. In fact, they fought back, sparring to the death with Giannis Antetokounmpo, hand-delivering the Bucks’ 4th consecutive home loss to open the season.

However, without the contributions of RJ Barrett, the season might look a bit different for New York. Over the past five games, Barrett has averaged 25-points per, providing his team with stellar shooting efficiency and physicality driving to the rim.

Barrett has taken the leap forward from average to above average, and now it boils down to consistency. Can RJ continue this level of production for an entire season? If so, he could earn his first All-Star appearance, identifying himself as a star.

In an exclusive interview with NY Post’s Steve Serby, third-year guard RJ Barrett detailed what makes him a star:

Barrett is confident in his abilities, indicating he was “born” to be an influence at the highest level. The work ethic he contains is reminiscent of the late Kobe Bryant, a player he looks up to and uses as motivation. It’s only fair he offers the same impression back to the world, building on a legacy of basketball legends that have made positive impacts on kids and adults alike.

The New York Knicks are building something special:

The Canadian-born player knows this Knicks team has the quality and talent to be exceptional, offering a bit of insight into why fans should buy into the hype.

The Knicks currently sit 6-3 on the season, with most of their losses coming at home, interestingly. Tom Thibodeau’s squad is still trying to find an identity — are they a defensive maestro or a team that lives and dies by the 3-PT shot?

After the win against the Bucks, it has become apparent that they developed a balanced approach — overcoming poor 3-PT shooting with elite defense and interior scoring. Barrett, though, is leading the charge, exerting maximum effort and setting the ton for the remainder of the team.