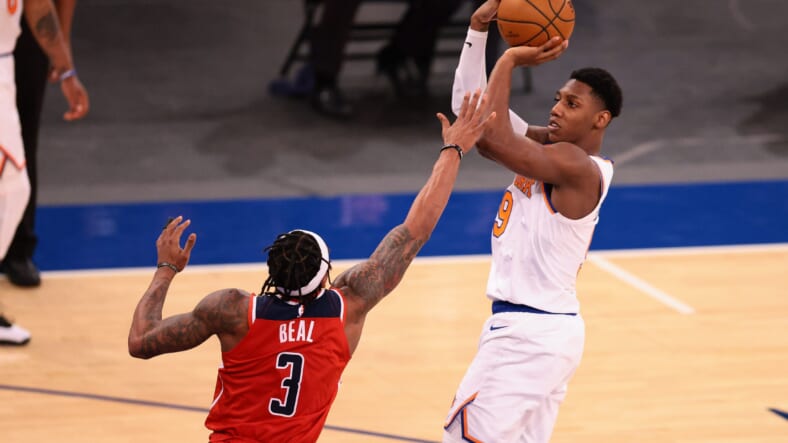 While the New York Knicks fell to the Boston Celtics on Wednesday evening by just two points, but second-year player RJ Barrett had another stellar performance. Barrett finished with 29 points, connecting on 10-of-14 shots from the field, and went 6-of-6 from downtown.

Barrett has taken a significant developmental leap this year, averaging 17.5 points per game over 52 contests, compared to 14.3 in his rookie season last year. His field goal percentage has risen from .402 to.450, and the three-point percentage skyrocketed. He currently sits at .380 on the season, finishing 2019-20 at .320.

His increasing efficiency from downtown has been a major turning point for the 20-year-old guard. His defense is already considered above average, and pairing it with quality offense will make him a star in the future. I would argue heâ€™s well on his way to being considered one of the better players in the NBA, and at his age, next season could see him finally cement himself as a premium asset.

â€œI donâ€™t know if Iâ€™m surprised because I see the time heâ€™s put into it,â€™â€™ coach Tom Thibodeau said regarding his three-point production. â€œAnd when weâ€™ve been home, he usually comes in every night to shoot and get extra shooting in. Heâ€™s really worked hard improving the shot and I think heâ€™s gotten real comfortable behind the line. And I also think his teammates are also doing a good job looking for him. Weâ€™ve had good rim reads and a lot of spray-outs, so theyâ€™re good-rhythm 3s.â€

The Knicks have a young player defining himself as a star:

Star players have a few defining qualities, and work ethic is one of them. Barrett is putting everything he has into the game of basketball, and it is clearly paying off on the court. For example, in a pivotal moment against Boston, he turned the ball over, dribbling it out of bounds. Just moments after, he returned the favor by draining a three-point shot to make up for his mistake. The resiliency and unwavering confidence are what stood out in that specific scenario, showing not only physical growth but mental.