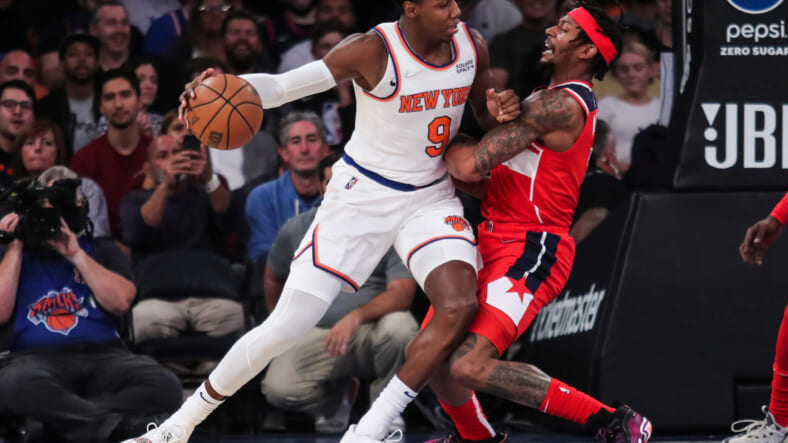 The New York Knicks might be staring their next star player right in the face with RJ Barrett. Barrett is entering his third season in the NBA with two years left on his contract after the upcoming season. The Knicks have a team option for the 2022â€“23 campaign and a qualifying offer at $14.3 million for the season after. Luckily, the team has Barrett locked up for the long term, and they also have the financial flexibility to extend him if he reaches his potential.

Barrett has taken a tremendous step forward on both sides of the ball, averaging 17.6 points, 3.0 assists, 5.8 rebounds, and shooting 44% from the field this past season at 20-years-old. He also connected on 40% of his three-point attempts, marking an 8% uptick in efficiency.

The young Canadian-born player believes this new season will present him an opportunity to take another behemoth step forward, and it starts with comfort in Tom Thibodeauâ€™s system.

During preseason play, RJ enjoyed 31.2 minutes of action over four games. He logged a 43% field goal hit rate and shot 48% from three-point range, attempting 6.25 per game, which would mark a career-high. He also contributed 4.25 rebounds and 0.75 blocks per game.

If RJ can continue building upon his three-point efficiency, he will find himself even closer to his first All-Star appearance, but he needs to create more opportunities on his own instead of being a spot-up shooter. Using his athleticism and strength driving to the basket is one way for him to maximize his skill set, aside from playing aggressive and tantalizing defense.

Ultimately, Barrett has the potential to be a premium-level player, which is why many floated the idea of trading him in a blockbuster deal for Damian Lillard this past off-season. However, the Knicks have big plans for their young guard, and it starts with helping take the organization to the next level after establishing a benchmark of success during the 2020â€“21 season.