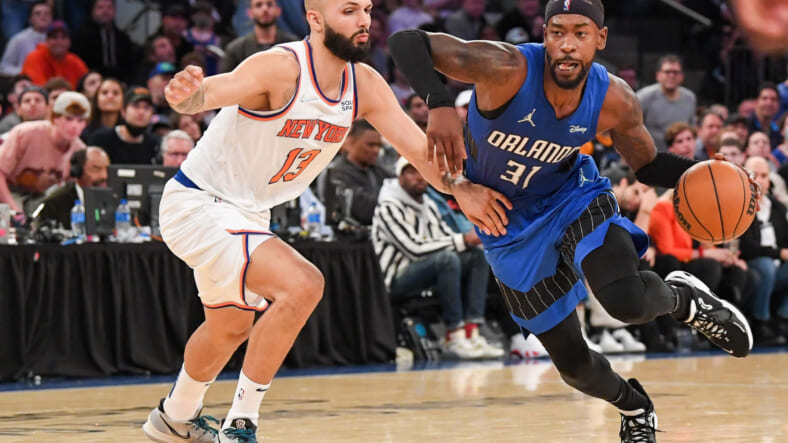 The New York Knicks dropped their first game of the season against Orlando Magic on Sunday evening by a score of 110â€“104. Despite overcoming a young Orlando team on Friday evening, the Knicks saw themselves playing down to their competition at home, allowing Cole Anthony and Terrence Ross to combine for 51 points.

The Magic exposed the Knicks on several levels, showing some of their weaknesses and vulnerabilities early in the season. It was clear the Knicks were a bit gassed, huffing and puffing with weak legs down the stretch, allowing Ross the score over 20 points in the fourth quarter alone, giving Orlando an advantage.

Nonetheless, letâ€™s take a look at a few primary takeaways from the loss.

Main takeaways in Knicks’ first loss of the season:

1.) The team is vulnerable when Julius Randle struggles

When All-Star power forward Julius Randle struggles, the Knicks have trouble supplementing his deficiencies. While Randle scored 30 points on the evening, he shot just 8-for-24 from the field and 20% from three-point range, which ultimately wouldâ€™ve been the difference in the game. If Randle hovered around his usual 40% mark, the Knicks likely wouldâ€™ve emerged victorious, but the rest of the team didn’t pick up his slack.

Kemba Walker played just 19 minutes, failing to make an impact on defense. It seemed as if Tom Thibodeau was trying to limit Walker, giving Derrick Rose the majority of the workload, as he posted 23 points over 29 minutes.

There is no doubt the Randle will bounce back from this tough outing, but good teams must demolish bad ones, and the Orlando Magic showed that the Knicks are capable of being exposed when their star player isnâ€™t hitting shots.

2.) Mitchell Robinson is the REAL deal

After Mitchell Robinson provided a brief scare after twisting his ankle in the second half, he bounced back to record 10 rebounds and 10 points, contributing three blocks in the process. His added muscle has proven to be a catalyst in his scoring efficiency the season, and the expectation is that he will be their primary starter moving forward.

With Nerlens Noel missing time due to a sore knee, Robinson is assumed to pick up the minutes, despite the lack of stamina to start the year. He seems to be easing his way into the game — his performance to start the year has been extremely encouraging.

3.) Defense seems to be an issue

Despite the Knicks being in the top 10 in both steals and rebounds, their defensive rating hovers in the middle of the league, especially after giving up 110 points to a poor Orlando team. In fact, Orlando hadn’t scored over 100 until Sunday evening.

Head coach Tom Thibodeau will be livid over his team’s lack of effort on defense and communication, allowing Ross to dominate in the fourth quarter and allowing open lanes for attackers to get to the rim. I fully expect Thibodeau to whip his players into shape as the season progresses, but he canâ€™t be too happy about their defensive production so far this season.

Good teams lose games too, but they also remain consistent with their strengths. With Randle having an off day, the Knicks needed more than an energized Derrick Rose to overcome Orlando, and they simply didnâ€™t get enough production from players like Evan Fournier and RJ Barrett, who combined for just 20 points.

While Fournier has been a stellar addition to start the season, scoring just eight points over 26 minutes is inefficient, and Obi Toppin hitting just 1-of-4 shots didnâ€™t help either.

The Knicks could look to decrease Immanuel Quickley’s minutes after he failed to score in 12 minutes, taking four shots. They need more consistency from their primary scores, as they shot a measly 27.1% from three and 37% from the field in the defeat.