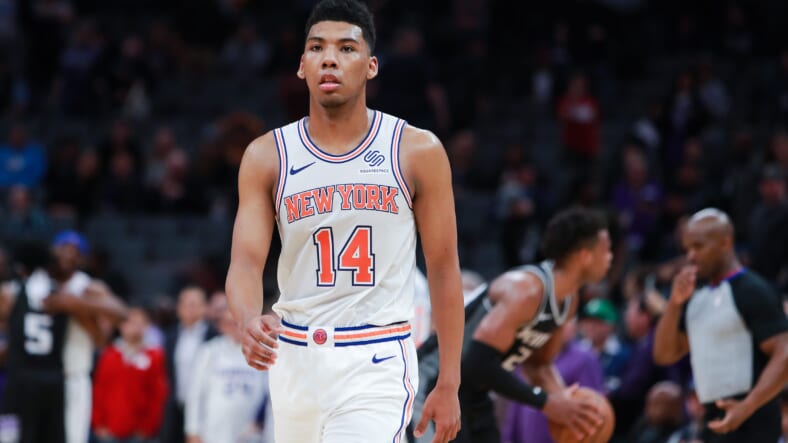 As we all continue to patiently, or impatiently, wait for the NBA season to resume in some capacity, Iâ€™ve been thinking a lot about the New York Knicks roster and what approach they should take if and when the season returns.

Assuming the NBA does indeed play out the remainder of the regular season instead of just jumping straight to the playoffs, among other possibilities, I think the New York Knicks should take advantage of that time by trying to play some of their young guys.

Since they once again wonâ€™t be making the playoffs, why not use this time to see if some of your young players can be pieces of the puzzle going forward? Here are some specific players who I think should see an uptick in playing time:

Allonzo Trier went from opening eyes and showing lots of promise last season to barely cracking the rotation this season. Itâ€™s been one of the more head-scratching decisions by Mike Miller and the coaching staff after he put together a rock-solid rookie campaign.

After appearing in 64 games and averaging about 23 minutes last year, Trier has only made 24 appearances and averaged just over 12 minutes this year. As a result, he went from averaging about 11 points to around 6.5. He was supposed to take the next step and see if he can develop a more all-around game, but that just hasnâ€™t been the case at all.

Trier definitely has his flaws, but he has the kind of natural scoring ability at all three levels that you just canâ€™t teach. And in todayâ€™s NBA, you can never have enough scorers.

It makes sense for the Knicks to give Trier more playing time if and when the season resumes, as they can make one last attempt to see if heâ€™s a part of their plans going forward or at the very least they could inflate his trade value. I wouldnâ€™t give up on Trier just yet, and I think he has a real chance of making the Knicks regret letting him go if they do indeed choose to move on from him.

Iggy Brazdeikis, the Knicks 2019 second-round pick, has been a mainstay on the bench for the team this season.

When heâ€™s played, and thatâ€™s been rare, itâ€™s only been in garbage-time situations. He averages about 6 minutes per game in only 9 appearances.

He has, however, been lighting it up in the G-League. Averaging almost 34 minutes a game in 24 games played, heâ€™s put together an impressive stat line of 21 points, 7.2 rebounds, and 3.1 assists per game. Heâ€™s also been very efficient, shooting the ball at about a 50% clip from the field and 34% from three.

Iggy has some flaws, especially on the defensive side, but he has flashed big-time scoring potential and a solid all-around game. He also offers tremendous upside, so it would be smart for the Knicks to sit some of their vets who arenâ€™t long-term pieces and get Iggy some valuable NBA minutes. Heâ€™s certainly earned it, so why not see if the Knicks have themselves another second-round steal?

Kenny Wooten is a guy whose potential Knicks fans are super excited about, and the Knicks should be feeling the same way. His unreal athleticism and jaw-dropping defensive ability pop out immediately when you watch him play, and heâ€™s just scratching the surface.

In 27 games for Westchester, Wooten has amassed a stat line of about 7.6 points, 6 rebounds, and 3.6 blocks. He obviously needs work on getting an offensive game, but he is already a defensive gem and I canâ€™t stop salivating over the thought of him and Mitchell Robinson locking down the paint together.

Assuming heâ€™s fully recovered from the dislocated finger he had surgery on a few months ago, Wooten should definitely see some NBA minutes. The Knicks obviously think highly of him, as they signed him to a two-way contract earlier in the season based on his G-League play.

He was most likely going to get a shot at some point before he got hurt, and now the pandemic has given him the time to fully recover from his injury and still get to prove himself on the big stage. If heâ€™s healthy, playing him should be a no-brainer.

Lamar Peters may not be a name that too many New York Knicks fans are familiar with, but they should start doing their research.

After opening up lots of eyes with his impressive G-League play this year, the undrafted point guard from Mississippi State has made a case for the Knicks to make room for him on the roster and get him some minutes. They could also sign him to a two-way next season with Kadeem Allenâ€™s two-way expiring, but I think it would make sense for him to get a little NBA experience this season as well.

In 32 games, Peters has averaged 17.8 points and a team-leading 7.3 assists on a little under 31 minutes a game. He even broke Westchesterâ€™s single-game assist record when he dished out 19 assists on a February 26th win against the Greensboro Swarm. He also flashed defensive potential, averaging 1.3 steals.

The remarkable improvement Peters showed over the course of this season should really have the New York Knicks intrigued about the player they can possibly develop him into. Even though they have Elfrid Payton, Dennis Smith Jr., Frank Ntilikina, and Kadeem Allen on the roster, none of those guys are great scorers or have proven to be franchise-caliber point guards thus far in their careers. Itâ€™s definitely worth taking a shot to see whether or not they might have found something with Peters.