Knicks Overwhelmed By Giannis After Second Half Surge In Loss 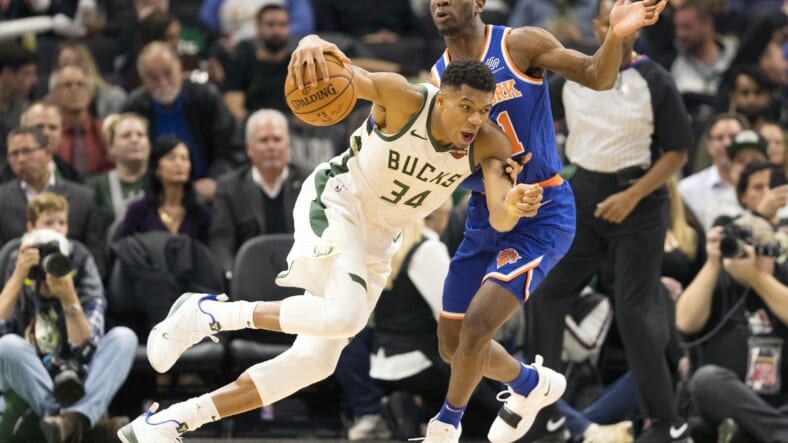 While the final score was 124-113 in favor of Milwaukee, don’t let that make you believe that this was a classic New York Knicks blowout loss.

What started off as a somewhat competitive game, the Knicks hung around during the 1st quarter on the road. After down 12 early, the bench came in and kept the game from getting out of hand led by Vonleh, Hezonja and Trier.

When the 2nd quarter hit, the story has change. Bucks star Khris Middleton caught fire and hit back to back to back 3-pointers and quickly turned a small 6 point lead intoÂ  a 15 point deficit. Middleton finished 7-8 from 3 on the night and 11-14 from the fieldÂ  pouring in a highly efficient 30 points. New York went into the half down 19 and David Fizdale had to make adjustments.

Unlike what we’ve seen in the past, Fiz had his Knicks come out for the 3rd quarter ready to play. Trey Burke was cooking. Mid range, taking it to the basket, finishing against the long and athletic Buck defenders and brought this team back. Burke finished with 19 points on 9-18 shooting, chipping in with 4 assists.Â The Knicks went into the 4th quarter only down by 1.

The 4th quarter hit and they simply had no answer for the Greek Freak and Khris Middleton. Giannis, who finished with 31/15/4, was too dominant. Scoring ans assisting until Middleton iced the game with a few 3 pointers at the end. Hardaway, who again shot poorly, 10-23 with 24 points, seemed to not get teammates involved.

Defensively, Coach Fiz’ young kids couldn’t keep up with the rotations on the 3 ball and that ultimately burned them. 2nd year guard/forward Frank Ntilikina led the team with 35 minutes but again, didn’t have much of an impact offensively. Kanter finished with his automatic double double (14/13) but it was not enough.

The sighting of Damyean Dotson was a welcome surprise. He plan strong and hard and shot 50% from 3 on 8 attempts and could lead to more minutes in the future, especially with rookie Kevin Knox out.

Next up, the Knicks take their talents to South Beach and take on the 1-2 Miami Heat. Can they maybe build off of that 3rd quarter momentum? Let’s see what the Fiz Kids have in store.