Knicks’ Obi Toppin deserves more minutes, but why is Thibs holding back? 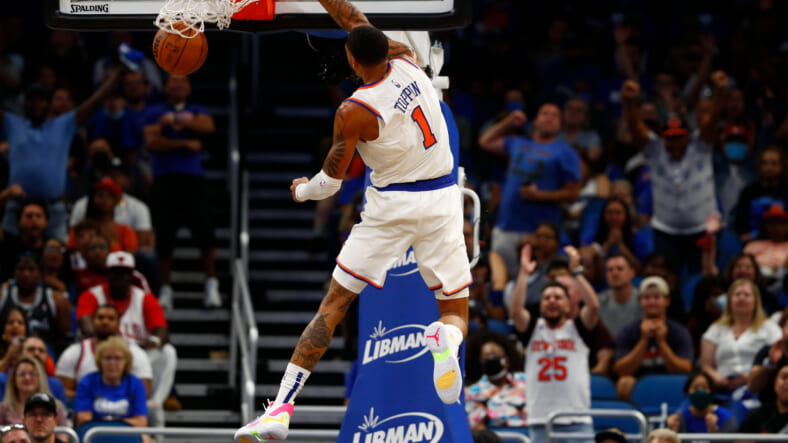 The Knicks have lost three of their last four games, but things could be a lot worse if not for the second team stepping up and supplementing the deficiencies of the starters. With chemistry and fluidity issues plaguing the first unit, veteran point guard Derrick Rose and young guard Immanuel Quickley have picked up the slack on the other end.

However, second-year forward Obi Toppin has made a lowkey Impact this season as a transition scorer and elevated defender. Over the past five games, heâ€™s recorded double-digit point production in two of them, despite the lack of minutes. In the Knicks’ most recent loss to the Orlando Magic, Toppin secured 14 points, two-assist, five rebounds, and shot 66.7% from three-point range.

Based on his recent performance, Toppin deserves more action and opportunities to showcase his talents and development. When head coach Tom Thibodeau was asked about Toppin earning more minutes, his response was rather vague and team-oriented.

â€œItâ€™s all based on performance,â€ Thibodeau said via SNY. â€œItâ€™s not an individual thing. Itâ€™s a team thing. Itâ€™s how the team is functioning and there has to be a balance to offense and defense. That factors into it as well.â€

At this point, it seems as if Thibodeau is trying to force the starters to play at a better level, which is understandable given the massive contracts the front office dealt out this off-season. Both Kemba Walker and Evan Fournier have been incredibly streaky and inconsistent this year, but Thibodeau canâ€™t start making significant changes and replacing starter minutes with Obi just yet. He needs the starters to be playing at a high level, which would ultimately lead to Toppin earning more minutes in blowout games and rest situations.

However, Thibodeau has begun to dabble with different player combinations to try and break the negative trend developing with the first team. Their lack of chemistry and ball movement has become apparent, and Toppin offers elite athleticism stretching the court and making plays in transition.

The best usage of the Dayton product is in combination with Quickley — the duo has developed outstanding chemistry early in the season. Quickley has an entirely different repertoire of attributes, but his press defense has given the Knicks a bit more efficiency in guarding the perimeter. Toppin still lacks on defense and doesnâ€™t have the agility to match Quickley’s strong suit off the ball.

If Obi can add more muscle mass/interior positioning and contribute more as a rebounder in the paint, that is where he will convince Thibodeau for more playing time. The Knicks need to re-identify themselves as a defense-first team that also contributes quality scoring production, but at this point in time, they simply aren’t recognizable compared to their 2020â€“21 season.