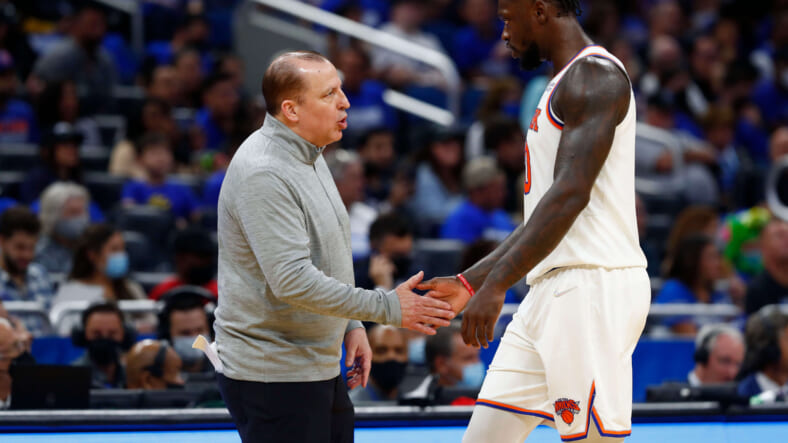 The New York Knicks have started off the 2021â€“22 season on a stellar note, tormenting the Orlando Magic on Friday evening. By a score of 121â€“96, the Knicks tacked on their second win of the season, and they will prepare to take on Orlando once again at MSG on Sunday night.

After getting off to a rocky start against Boston in the shooting department, connecting on 37.8% of their three-point attempts, they took things up a notch against the Magic. In the victory, they shot an impressive 44.4% from three-point range and set a franchise record with 24 hits. They also logged a 50% field goal percentage, 38 rebounds, 34 assists, and turned the ball over just 11 times collectively.

Analytically, the Knicks have started off the year in great shape, but head coach Tom Thibodeau gave a bit of insight into why the team is performing so well. Having worked all off-season with one another and scrimmaging before preseason even began, the Knicks embodied a sense of passion for playing in New York. They want to win not only for the fans but for themselves.

â€œItâ€™s a reflection of them playing for each other and just making the right play,â€™â€™ Thibodeau said.

While having a disciplinary coach is effective, establishing a mentality in the locker room that revolves around winning for one another and playing hard despite the score or moment is essential.

Shooting from range has become an even more important part of successful team strategy, and the Knicks signing Kemba Walker and Evan Fournier plays right into that equation.

That is a primary reason why the coaching staff asked their centers to begin working on shooting. They need every player capable of contributing in versatile ways if they want to keep up with the times.

â€œWhat weâ€™re seeing in the NBA today is the premium thatâ€™s put on shooting,â€™â€™ Thibodeau said. â€œOftentimes, thereâ€™s at least four 3-point shooters on the floor. Now weâ€™re seeing that thereâ€™s five. One of the things why I think weâ€™re effective when Julius is at the five and Obiâ€™s at the four is because the floor is opened up and now we have driving gaps where we can get to the basket. The great value in our team is the versatility.â€™â€™

The team has been experimenting with different player combinations, but the emergence of second-year power forward Obi Toppin has contributed immensely toward the team’s recent success. Toppin posted 13 points over 23 minutes in the victory over Orlando, and his fellow draft classmate Immanuel Quickley expressed his excitement over Toppinâ€™s success.

The Knicks have truly captured a team-first mentality, as winning remains the priority. Some players struggle losing minutes or being factored out depending on the game, but it seems they are genuinely happy for one another to experience production and success. That is a long-term solution toward a problem the Knicks have faced the past decade or so, a lack of desire.