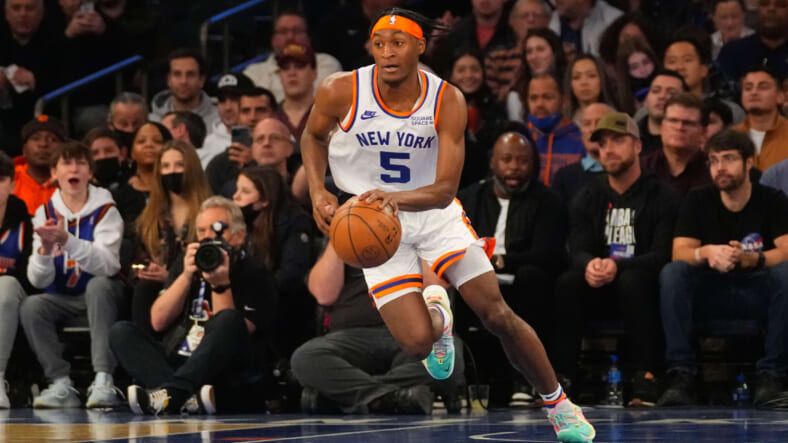 On Tuesday evening, theNew York Knicks are gearing up to face off against the Indiana Pacers, a team who have dropped four consecutive games and five of their last six. With losses to the Cleveland Cavaliers and Chicago Bulls, Indiana has allowed 108 points or more in four consecutive games.

Seemingly, the Pacers have struggled defensively as of late, similar to a Knicks team that is down several players due to the NBA’s health and safety protocol. New York has dropped two games consecutively against sub .500 teams after winning three straight thanks to a relatively healthy team.

However, with Randle out and Obi Toppin taking his spot, the Knicks have lacked the physical presence inside and demanding presence of their star power forward. Toppin had a career-high 19 points against the Toronto Raptors over the weekend, but it wasn’t nearly enough to help push them over the edge, losing the game by 15 points.

Lackluster rebounding and ball movement lead the way, and the Knicks desperately need more of some of their critical role players. Immanuel Quickley is one shooter who needs to step up and help the team offensively, scoring just 20 points combined in the most recent losses to Toronto and OKC.

However, New York is expected to get Mitchell Robinson back for the game on Tuesday, providing a significant interior presence. The Knicks desperately need Robinson to help stifle Demontas Sabonis and Myles Turner around the rim.

The Knicks can win this game against a downward trending Indiana squad, but it all depends on their energy and shooting efficiency, especially from 3-PT range.

Knicks must wait a few extra days to sign player:

Via Frank Katz of The Athletic, the NBA voided the contract of Ryan Arcidiacono, whom they signed over the weekend to help a depleted point guard corps:

The NBA voided the New York Knicks 10-day contract with Ryan Arcidiacono. After the Knicks had two players exit the health and safety protocols, and released two players, they no longer qualified for a hardship exception.

The Knicks will have an opportunity to sign the former Villanova star to a 10-day contract in the coming days.

In addition to Arcidiacono, the front office also partook in a three-team trade that brought Denzel valentine to the Knicks, but they ended up waving him shortly after to clear $1 million in salary space. A good piece of business by the front office to add a bit of flexibility to their trade deadline options.