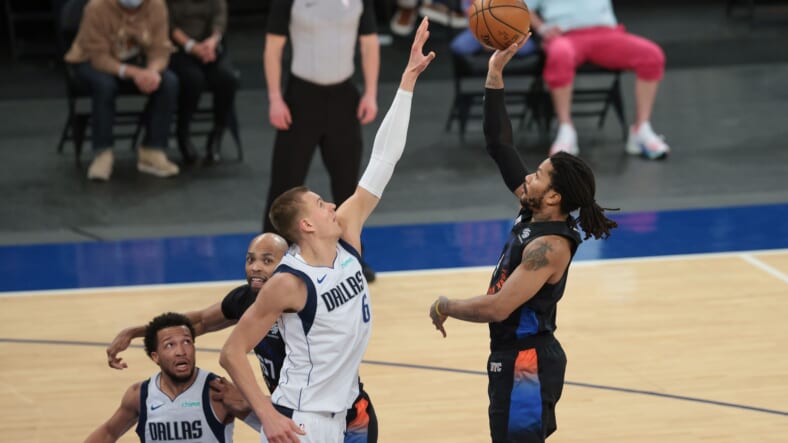 The New York Knicks took on the Dallas Mavericks on Friday night, showcasing another poor offensive performance. All-Star Julius Randle struggled significantly in the loss, shooting 5-of-20 from the field and 1-of-7 from downtown over 37 minutes. This was Randleâ€™s worst game of the season, by a fair margin.

However, Alec Burks once again performed adequately, scoring 20 points, but the entire Knicks team simply looked off. That makes it three consecutive losses, against the Heat, Timberwolves, and now the Mavericks.

Following the defeat, Knicks fans rained down boos on former New York star Kristaps Porzingis, and it is exactly what he expected from the loving fans.

â€œThe reaction was what I expected again, of course,â€ Porzingis said. â€œIâ€™m happy we got the win. We lost the two [games] last season, and tonight we grinded this game and got the W against them. Theyâ€™re a tough team and they played really good defense on me and on us in general.

â€œJust overall, a tough game, a grinding game, and itâ€™s good to come up with a win against a tough team like the Knicks.â€

Despite the poor fan reaction, Porzingis made sure to respond with positive comments regarding his opponentâ€™s defense and overall performance. While New York is sliding, we know theyâ€™re capable of playing better.

One Knicks players came to his defense:

Post-game, starting point guard Derrick Rose came to Porzingisâ€™ aid, giving a bit of perspective into how these trades can unfold and that the team can be just as much to blame.

â€œTo be honest, yeah [it is weird]. But when you think about the situation, it wasnâ€™t an easy situation for both sides, with him wanting to leave and them, the fans, feeling like they put their all into him by supporting him,â€ Rose said.

â€œI get it. I was in a similar situation when I left Chicago. People felt like it was me. Not to talk too much about it, but yeah, I get both sides.â€

At the end of the day, the Knicks have to move on, and while they have outperformed expectations this year, it seems as if fatigue is starting to set in and their offense is taking a backseat. Maybe staying quiet at the trade deadline was a mistake after all.