Knicks News: One player who’s likely to be traded prior to deadline 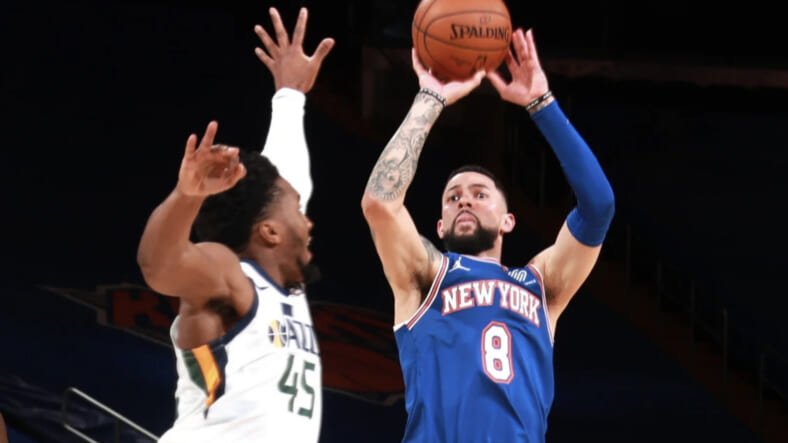 The Knicks are preparing to take on the Washington Wizards on Tuesday evening, but with the trade deadline just a few days away, they could make a last-second move to bolster their squad. The expectation is that the Knicks wonâ€™t make a big splash, trading for a star player but rather waiting until free agency to sign one on their own instead of giving up draft capital. While they do have plenty of selections to choose from, they are taking a more conservative approach and building within their own foundation. New York feels as though they can get it done with their current team, as they recently fell 101-100 to the Philadelphia 76ers, a favorite in the Eastern Conference.

However, the Knicks actually might take an intriguing approach, trading away players for capital instead of parting ways with valuable assets.

As per Ian Begley of SNY, the Knicks could be looking to trade Austin Rivers in the coming days:

One transaction to monitor? A potentialÂ Austin RiversÂ move. If you listened to Riversâ€™ press conference a few weeks ago, he sounded like a player who expected to get traded. Even with all of the Knicksâ€™ injury issues, Rivers has only played a total of 5:58 since the Rose trade. (Heâ€™s been inactive since the All-Star break due to paternity leave).

Having been connected to star players like Bradley Beal, Zach LaVaine, and even Lonzo Ball recently, it would be a surprise if they didnâ€™t walk away with some sort of offensive support. Thereâ€™s always a possibility they land Andre Drummond to supplement the center position, especially with Mitchell Robinson picking up a minor ankle sprain against Philadelphia on Sunday.

Trading away Rivers would be a beneficial move, considering heâ€™s averaging just 7.3 points over 21 minutes this season. His impact has been minimal, playing uninspired defense and inconsistent offense. Early on in the year, he had a few streaky performances where he flashed potential, but he lacks that consistency on both sides of the ball head coach Tom Thibodeau demands. At the very least, heâ€™s not dominant in any specific category.

Unless New York can strike a deal for Drummond that includes Rivers, they might only be able to get depth or draft picks out of a potential trade.