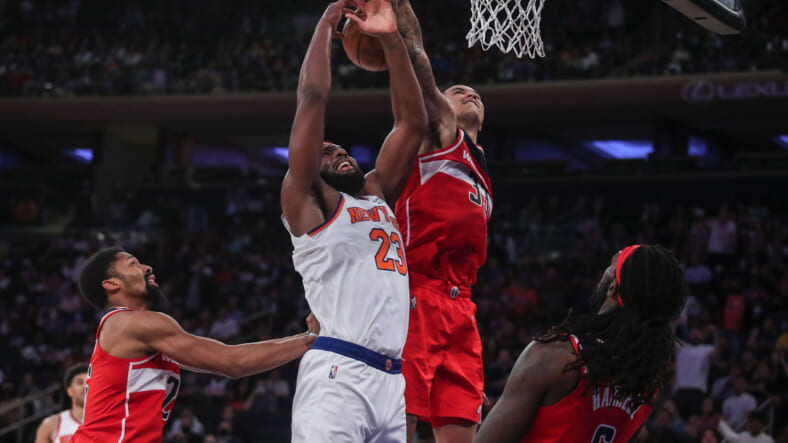 The New York Knicks are just a few days away from the start of the regular season against the Boston Celtics. However, the preseason finale against the Washington Wizards gave them an opportunity to get center Mitchell Robinson onto the court for the first time since fracturing his foot last season.

Robinson, who has been working diligently in the weight room to increase his mass and size, showcased some of that power on a few put-back dunks. Robinson enjoyed 27 minutes of play, connecting on 3-of-8 field-goal attempts, picking up nine rebounds and two steals.

However, the 7-foot big man indicated that his first outing wasnâ€™t bad, but it was bad.

Mitch struggled with his conditioning levels, which was to be expected given his inability to run and do stamina training for the majority of this past off-season. It will take him a few games to get back in the flow of things, but playing 27 minutes and holding his own was impressive enough. Robinson also stated that he needs to feel more comfortable around the rim, taking his time instead of rushing shots or opportunities.

All of these factors will improve in due time, but Robinson displayed his newfound power and strength in the paint, which should provide Knicks fans with sufficient optimism.

The Knicks waived four players on Saturday, including Brandon Goodwin, Brandon Knight, Aamir Simms, and MJ Walker. While some of these options will likely find their way to the G -League team, the Knicks rounded out their 15 roster players for the regular season. A few interesting retentions include Wayne Selden, Jericho Sims, and even Kevin Knox.

Selden proved enough to retain a spot with the Knicks, and as an experienced veteran in the NBA, he clearly has a bit more value than some younger options or players who havenâ€™t made a significant impact in quite some time. Sims, while young and inexperienced, showed fantastic athleticism and aggressiveness in the paint, and while he needs to work on his defensive positioning, he has significant potential if given the right opportunities and time to grow. Sims is currently on a two-way contract this year but could very well sign a new deal to stick with the team for the next few seasons at a minimal cost.

Knox, who showed signs of life to hold him over for one more season with the Knicks, is likely in his final year with New York. Knox has one more year on his contract until the Knicks have to make a decision on his qualifying offer, which would pay him about $8 million for the 2022-23 season. The team probably doesnâ€™t want to execute his QO, given he contributed just 3.9 points last year. However, against the Pistons last week, Knox contributed six points in 12 minutes, far outperforming his statistics from a season ago.

Ultimately, Knox is a solid bench piece at this point in his career with the team that drafted him, but he is on thin ice given his dwindling minutes over the past three seasons.