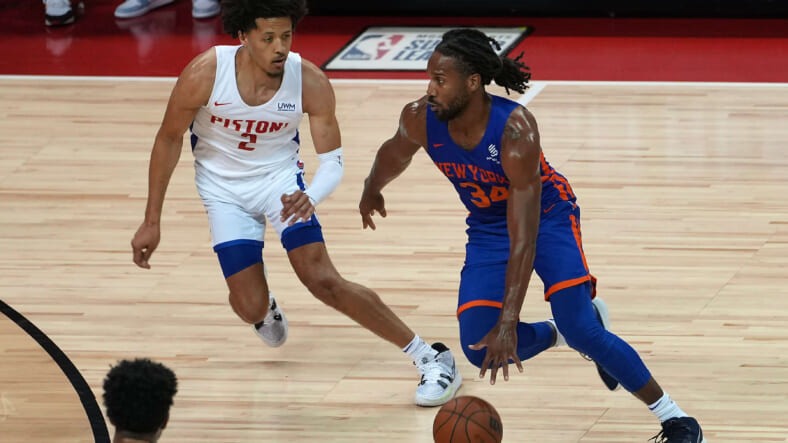 The New York Knicks have entirely changed course after hiring new president Leon Rose to help steer the ship in a direction that better represents New York City. With a tough defensive mentality under head coach Tom Thibodeau, players are beginning to view the Knicks as an appealing destination in free agency, despite missing out on several big-name players like Damian Lillard and Chris Paul. However, the front office has been working diligently to add talent to an already strong team.

Rose indicated that they consider every opportunity aggressively, which hints at their mentality this offseason eyeing blockbuster trades. Nonetheless, while Lillard remains with Portland and Paul sign an extension with Phoenix, the Knicks walked away with Evan Fournier and Kemba Walker, two players that should contribute significantly moving forward.

The mentality toward growth and development is what should spark fans’ excitement. The team finally has a front office that is not making premature moves and decisions that would set the franchise back, but they are remaining diligent and progressive.

â€œWeâ€™re gonna be aggressive as far as knowing whatâ€™s going on and as far as being on top of things and looking at opportunities,â€™â€™ Rose said, perÂ The New York Post. â€œBut at the same time, weâ€™re going to be prudent and disciplined in decisions that we make that are going to take into account positives and negatives, short term, long term, all those factors in a decision-making process.â€

The front office has failed to remain disciplined over the past few years prior to the 2020-21 season, making premature moves and signing players without an established plan has hurt the team’s progression and draft selections. After a strong first season under Thibodeau, they backed up their words with several improvements to the roster and a strong draft class, including Quentin Grimes and Miles McBride.

The players have adapted this disciplined mentality also, partaking in intense scrimmages before training camp even begins in a few weeks.

The Knicks are signing a few players as camp bodies, including Wayne Selden, who agreed to a non-guaranteed training camp contract, per Keith Smith of Spotrac.

Selden has spent three seasons in the NBA, enjoying 124 games of action. He averaged 7.3 points, 2.7 rebounds, and 1.5 assists per game. Selden spent the off-season with the Knicks playing in the Summer League, and while heâ€™s a long shot at making the roster, you can never have enough bodies competing to start the season.