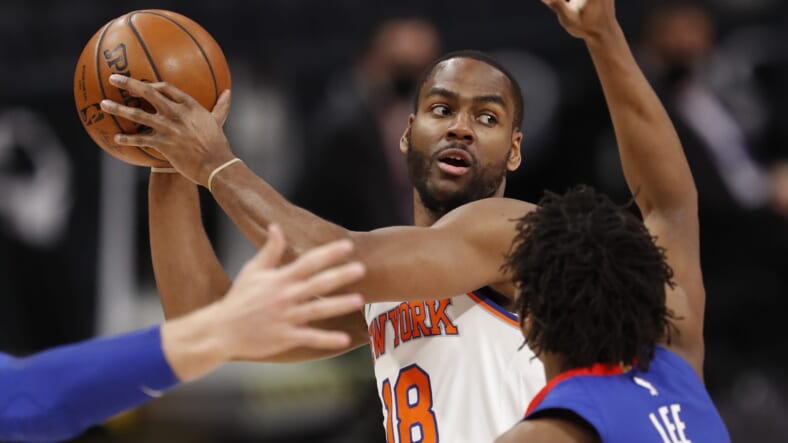 After a few days of rest, the New York Knicks are gearing up to take on the Houston Rockets on Sunday, and veteran guard Alec Burks is available to return. However, the Knicks are taking it easy with the former first-round pick in 2011, as he fights his way back from COVID-19 in the fatigue that comes with it.

Head coach Tom Thibodeau wants to make sure that Burks is 100% healthy and his stamina is up to par before utilizing him in one of the most important road trips of the year for New York. The Knicks will take on the Houston Rockets on Sunday and take their talents to the West Coast shortly after, where they will play the Phoenix Suns, LA Clippers, Los Angeles Lakers, and San Antonio Spurs.

Having Burks available will be extremely influential, and while the Knicks managed to win without him while he recovered from Covid, he has played a massive part in their success this year.

â€œHeâ€™s got to get his conditioning up to speed,â€ Thibodeau said. â€œWhen heâ€™s comfortable, weâ€™ll get him in there.â€

Burks is averaging 12.6 points, 2.2 assists, and 4.5 total rebounds per game over 25.8 minutes. He is shooting .414 from the field and .408 from beyond the arc, the best success rate in his entire career. As not only a veteran mentor for the youngsters, he curates instant offense for a team that has lacked in the category at times.

Despite his loss the past few weeks, Thibodeau understands that his team is extremely deep, and they managed to win games without him, but gaining him back is important.

â€œI think itâ€™s one of the strengths of our club in that we do have a deep team,â€ Thibodeau said.

Not only do the Knicks have an extremely deep team, but they all also have the same mindset and mentality towards victory. They understand that every single game has significant importance toward their playoff hopes, as they currently said, 1.5 games ahead of the Atlanta Hawks and Boston Celtics in the Eastern Conference.