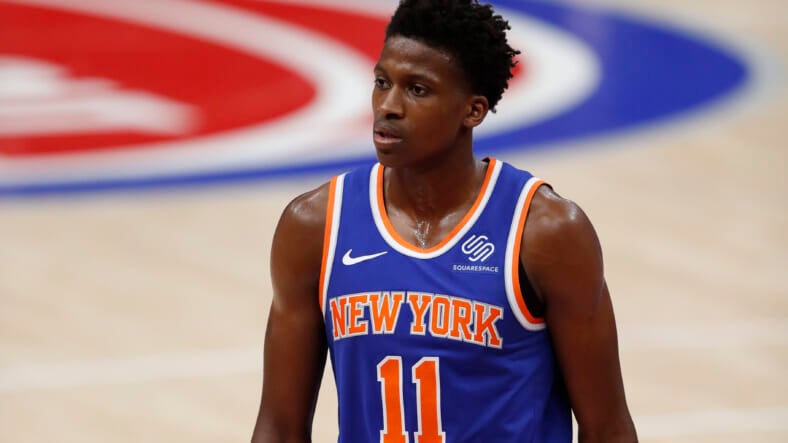 The New York Knicks made it a priority to upgrade the point guard position this off-season, which included letting former draft pick Frank Ntilikina hit the streets in free agency. Ntilikina, who has been looking for a new home the past few weeks, is expected to sign with the Dallas Mavericks, according to Marc Stein.

The Mavericks have emerged as the likely next destination for former Knicks guard Frank Ntilikina, league sources say.

The Mavericks were expected to draft Ntilikina back in 2017 but ended up going No. 8 to the Knicks, so Dallas selected Dennis Smith Jr. at No. 9. Interestingly, both players ended up playing for New York in a limited fashion, and both are considered massive busts.

During his time with the Knicks, Ntilikina averaged a measly 5.5 points, 2.7 assists, and shot 36.6% from the field. He secured a 42.9% effective field-goal percentage, showcasing almost no offensive production during his four years with the team.

However, Frank has always been known for his quality defense, averaging 0.8 steals despite playing in just 19.5 minutes per contest. For a Dallas team that clearly had their eyes set on him back in 2017, taking a chance on the 22-year-old could end up being a good move. A change of scenery might help him tap into some undeveloped parts of his game, but the Knicks will move forward with rookies Miles McBride and veterans Kemba Walker and Derrick Rose.

Speaking of McBride, the West Virginia stand-out recently signed a deal to become an endorsed athlete with Nike. While the contract details have not been released just yet, he will undoubtedly be earning a pretty penny on the side with this endorsement.

McBride showed out during Summer League play with the Knicks this off-season, averaging 27.7 minutes over six games. McBride posted 15.2 points on 53.2% shooting from the field and 50% shooting from three-point range, attempting 6.0 shots from range per game. He also shot 87.5% from the free-throw line and tallied 3.5 assists and 3.5 rebounds.

The Knicks are expecting big things out of the rookie, but it will be difficult for him to find playing time this season unless injuries allow him the opportunity.