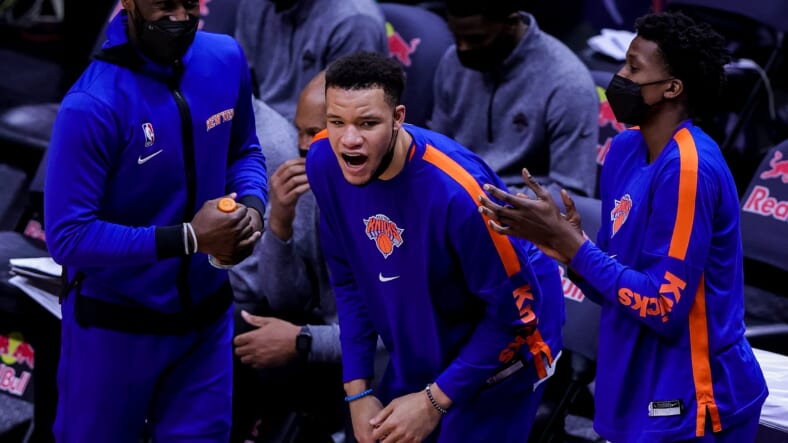 The New York Knicks likely have a shortlist of point guards they will target this off-season, especially with the market flush with talent. Until players like Chris Paul decide on their player options and alternative clubs present big offer sheets to restricted free agents, we wonâ€™t know entirely where the Knicks stand in their pursuit of a point guard, but there are a few options that should be left off the list.

This week, a connection between New York and Los Angeles Lakers point guard Dennis Schroder was presented, but it seems as if the Knicks have their name involved with every available PG on the market. Creating a sense of urgency and confusion, this will hopefully provide them with leverage during negotiations.

Jake Fischer of Bleacher Report stated that the Knicks could be interested in Schroder, but what a mistake that would be:

â€œLeague sources expect Chicago and New York to emerge as Schroder suitors, and both could be conducted via sign-and-tradeâ€”although Knicks certainly have the cap space to sign him outright. New York will likely have north of $50 million to spend this summer.â€

Schroder is seeking a massive deal worth $20+ million per season, and while he is an adequate point guard, statistics do not justify his demands. Schroder is about to turn 28 years old, averaging 15.4 points, 5.8 assists, and shot 43.7% from the field last year, detailing a player that’s commanding far more than his worth. Having been with three teams over the past four seasons, Dennis has proved to be a consistent player via health, but his production has leveled off, and his potential mightâ€™ve hit its max.

If the Knicks are looking to overpay for a player that wonâ€™t blow them away and really elevate the team, Dennis is their guy, but there are so many other options that could present more value at a lower price point. Even trading for Collin Sexton might be a more efficient move, given his scoring production and $6.3 million salary hit for next season.

The Knicks are going to have to utilize Kevin Knox and his value this off-season:

Every year that Knox spends sitting on the bench is another year the Knicks missed out on trading him away. His minutes per game has quickly fallen to a minimum since his inception into the NBA three years ago. He averaged just 3.9 points over 11 minutes last season, and if New York is still unwilling to part ways with Knox, they are simply hurting themselves. He has one year remaining on his deal at $5.8 million before his qualifying offer kicks in, which will be avoided like the plague.

In fact, most teams may not even see him worthy of earning $5.8 million, to begin with, so it will be tough to package him in a deal and expect value in return. However, at 21 years old, there is still potential to unearth, and another team might see a strategy to unlocking it. One way or another, we will see how good President Leon Rose is with his negotiating skills.