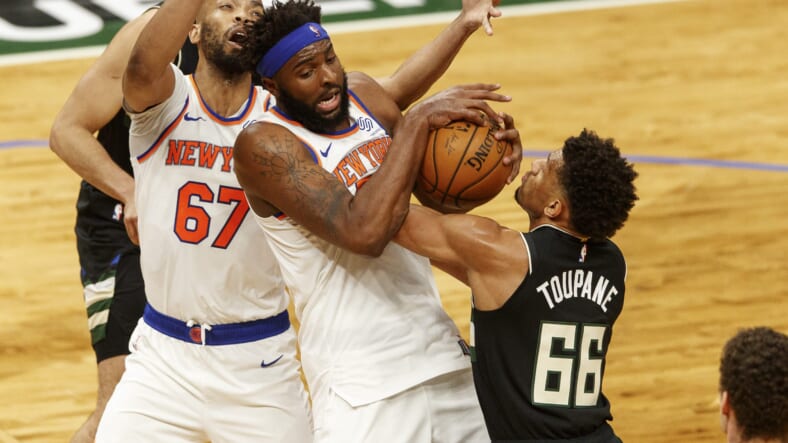 The New York Knicks have committed to the young center, Mitchell Robinson, whoâ€™s in the final year of his rookie contract. The former second-round pick will earn $1.8 million for the 2021-22 season, as a team picked up his club option, which is fully guaranteed.

Head coach Tom Thibodeau prioritizes defense, and while Robinson has never average double digit points, he has the potential to be one of the best defensive big men in the league. However, his inability to stay healthy has dampened his development thus far in his career.

Last season, Robinson played in just 31 games, suffering a fractured foot and hand that hurt his growth. During those games, he average 27.5 minutes, including 8.3 points, 1.1 steals, 1.5 blocks, and 8.1 rebounds.

Robinson experienced growth in several categories, including steals with sleight of hand and rebounds but saw his field-goal percentage drop and blocks drop by 25% compared to his 2019â€“20 season.

Up to this point, the Knicks simply havenâ€™t been able to rely on him as their regular starter, which led the team to extend Nerlens Noel on a three-year contract after an impressive campaign where he averaged 6.4 rebounds and 2.2 blocks per contest.

Essentially, management realized they needed a back up plan in case Robinson stalled or picked up another injury. They also drafted Jericho Sims out of Texas, who showcased physicality and strength in the paint during the Summer League. With a mix of youth and veteran talent, the Knicks are hoping the center position no longer plagues them this upcoming season.

Robinson, though, has his eyes set on something optimistic by attainable given his skill set. The 7’0″, 240-pound center has a personal goal of Defensive Player of the Year. Of course, that would require him to remain healthy for the entire season and play maximum minutes, bolstering his stats and showing continuity and consistency.

Man let me lock in bro I definitely can either get DPOY or at least be in the conversation #personalgoal https://t.co/UJhgEZApaj

If Robinson can achieve this goal, thereâ€™s no question he will earn a lucrative second contract, and the Knicks are hoping he can reach his potential. Ever since recording 2.4 blocks in his rookie season, the team recognized what heâ€™s capable of achieving. They sorely missed his physicality and length in the paint during the postseason against the Atlanta Hawks. With his athleticism and ability to guard the perimeter, Robinson showcased his defense against Trae Young earlier in the season, locking him down and taking away floaters and three-point shots off the pick-and-roll.

Noel and Taj Gibson simply donâ€™t offer the same skill said Robinson contains, but thereâ€™s optimism he will be 100% ready to go at the start of the campaign in October.

Do you think that Mitch can win DPOY, and what would it take? Comment below!