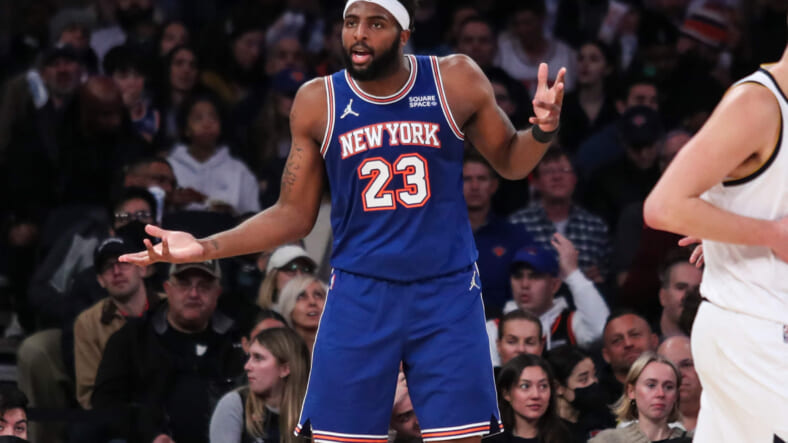 One of the Knicks‘ biggest problems this year is the lack of a scoring big man, going with a traditional strategy at the five, including Mitchell Robinson and Nerlens Noel.

Both of their primary centers are known for their rebounding and defending, but the Knicks had big hopes for Robinson coming off a season struck with injury, including a fractured foot and hand. Unfortunately, the 23-year-old center has failed to take a significant jump in production on both sides of the ball.

In fact, Robinson has seen a decrease in the number of statistics, including points, blocks, and even rebounds, compared to his 2020â€“21 season, showcased by a similar sample size at this point the season.

After adding a significant amount of muscle to provide more physicality inside, Robinson has dealt with stamina and fatigue issues. His inability to remain potent and aggressive on the court has become a liability at times, something he has mentioned in recent days.

However, after the Knicks’ resilient loss to the Golden State Warriors on Tuesday evening, Robinson posted a vaguely targeted Instagram story. Some believe it is aimed at free-agent acquisition Evan Fournier, who has provided little to nothing defensively and has been incredibly consistent with his shooting.

Robinson specifically mentioned running for cardio and playing help defense, which could be a statement from head coach Tom Thibodeau and what the team needs to improve on, or specifically what the coaches are telling him.

With the team losing seven of their last eight games and four consecutive, it is possible Robinson could be on his way out via trade at the deadline in a few months. The front office has been connected to a variety of players, including Ben Simmons of the Philadelphia 76ers and Myles Turner of the Indiana Pacers.

One way or another, Robinson has put himself in a place to be traded, especially after his failure to take a step forward this season. The Knicks need another scoring threat inside who can also shoot from range, suggesting Robinson is a liability on offense. New York doesnâ€™t necessarily need him as a transition player, given Obi Toppin’s rise and incredible athleticism on dunks.

Unless Mitchell can elevate his game to a level we havenâ€™t seen before, the front office will likely include him in a trade if they manage to execute one at the deadline this year.