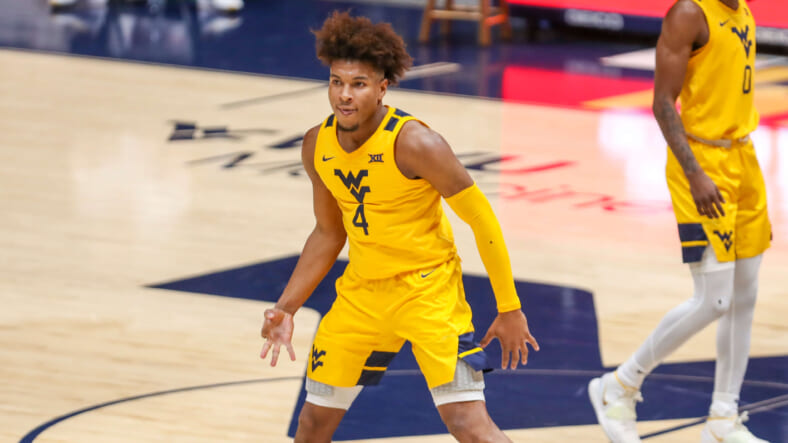 With the longest wingspan out of any point guard in the NBA draft at 6’8″, New York Knicks‘ 36th overall selection Miles McBride is preparing to take his talents to the next level. Having slipped to the second round, McBride promised to make every team that passed on him regret the decision, but he found himself in a perfect landing spot after featuring on a tough West Virginia team.

As a former quarterback and leader, McBride has all the tangible and intangible traits to make an impact in his rookie season. However, the Knicks would be wise to bring in a veteran point guard for McBride to learn from and develop behind.

McBride has been compared to one fantastic veteran, though, and coincidentally, heâ€™s also a free agent.

â€œI definitely honored to have my playing style compared to Kyle Lowry,â€™â€™ McBride said on a Zoom call Friday, via Marc Berman of The Post. â€œI know heâ€™s led the league in charges and Iâ€™m willing to do anything to win. Thatâ€™s something I certainly can get behind.â€

Lowry has been connected to several teams this off-season, including the Dallas Mavericks, Miami Heat, and New Orleans Pelicans. The Knicks could enter the fold, as he could provide McBride a perfect opportunity to learn behind a seven-time All-Star.

McBride has the mentality to quickly make an impact at the next level, specifically with his defense, averaging 1.9 steals per game last season. With the biggest hands in the draft class among guards, his ability to poke the ball free and cut passing lanes is unique. That is primarily while Tom Thibodeau valued him just days before the draft commenced.

â€œI feel like I have a winning DNA throughout high school, college,â€™â€™ said McBride, who was a high-school quarterback in Cincinnati. â€œThatâ€™s the main thing I want to bring to the Knicks. Winning and continue to go upwards. I feel like doing all that winning, a lot of teams will regret not taking me.

Thibodeauâ€™s style of play and disciplinary guidelines fit McBrideâ€™s character perfectly. Having played under Bob Huggins with West Virginia, McBride knows exactly what to expect from Thibs. Working hard every day to improve your talents and playing a team game is exactly comes to mind, but an obvious focus on defense will be present.

If McBride can mirror Lowryâ€™s qualities at the next level, he could end up being a very solid long-term solution at point guard. Last season he averaged 15.9 points, 4.8 assists, and shot an impressive 41% from range over 3.8 attempts per game.