Knicks looking into lethal sharp-shooting prospects ahead of draft 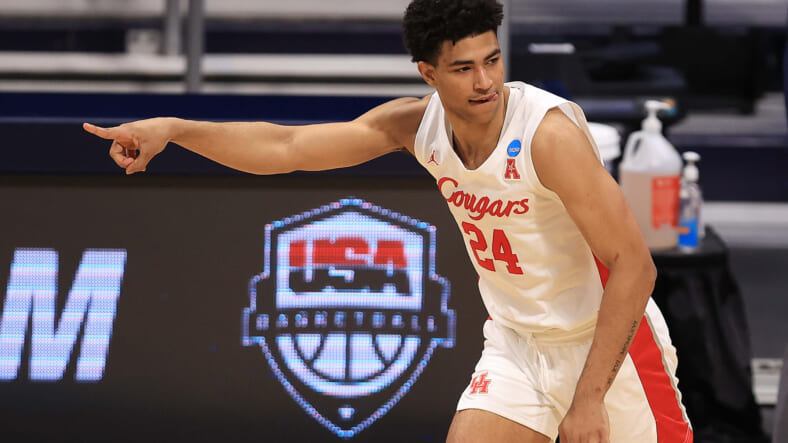 The New York Knicks are doing tons of research on prospects ahead of the NBA draft on July 29, and with three first-round picks to spend, the team could look to package their selections together and move up or sit still and add several new players. The Knicks might not have enough roster spots to field three more rookies, but they brought in several options for personal workouts this past week to gauge their fit and overall make-up.

The Knicks reportedly worked out Virginia swingman Trey Murphy III on Tuesday, but The Post has learned that another wing who can shoot and defend wowed team brass two weeks ago at their Tarrytown facility.

Quentin Grimes, the 6-foot-4 shooting guard who transferred from Kansas to Houston in 2019, is on the Knicksâ€™ radar with one of their first-round picks (No. 19 or No. 21) in the July 29 NBA draft.

A month ago, Grimes was thought to be more likely to be selected in the very late first-round or early second round. The Knicks have the 32nd pick (second in the second round), but it looks doubtful Grimes, a junior, will still be there.

It is clear the Knicks are prioritizing adding another high-end shooter, and Grimes averaged 17.8 points with Houston this past season, connecting on 40% of his 8.3 attempts from three. He also hit 40% from the field over 14.2 attempts per game. Averaging 32.8 minutes over 30 games, Grimes seems to be ready to take the next step to the NBA. At 6’5″ and 205 pounds, Grimes presents a lethal shooter if developed correctly.

SNY is reporting that the Knicks are working out Chris Duarte:

Another player, the Knicks, are reportedly interested in is Chris Duarte, a 6’6″, 190-pound guard out of the Dominican Republic. Duarte averaged 17.1 points, 4.6 rebounds, and shot 42% over 5.5 times from three last year with Oregon. Averaging 34.1 minutes per game, Duarte projects as a versatile shot-maker but is currently 24 years old but older than the rest of the class. However, he has fantastic mechanics with great footwork, giving him a competitive edge at the next level.

He doesnâ€™t exactly fit the 3-and-D style wing, given his lack of size, but he is a fantastic finisher who has the potential to be lethal from range. With Knicks’ small forward/shooting guard Reggie Bullock preparing to hit the open market, the team could be looking to replace him with a draft selection, but free agency presents plenty of options as well, including Golden State Warriors forward Kelly Oubre Jr.