Knicks: Is Evan Fournier an upgrade over Reggie Bullock? 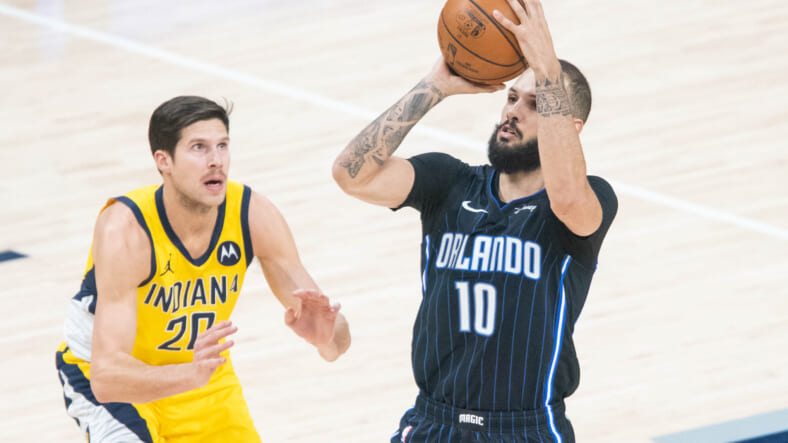 When Evan Fournier woke up Tuesday morning after beating Italy in the quarterfinals of the Olympics, he made the decision to sign with the New York Knicks on a four-year, $78 million contract. With former small/shooting guard Reggie Bullock taking his talents to the Dallas Mavericks on a three-year, $30.5 million deal, Fournierâ€™s contract seems a bit overzealous.

The Knicks are paying Evan twice as much as Bullock received on the open market, but they are getting a vastly different player in return, despite the fact they both play similar positions.

How does Fournier compare to Bullock, and what are the Knicks gaining in the French-born player?

Simply looking at the statistics, you can already see that Fournier offers far more scoring production, nearly doubling Bullocks’ total from last season. Traditionally, the former Boston Celtic and Orlando Magic shooter is a double-digit scorer throughout his career, posting a high of 18.5 during the 2019â€“20 season.

Bullock was best known for his catch-and-shoot abilities, especially when spacing the floor and picking out three attempts without much resilience. Fournier is able to create his own shots and spread the ball around the floor, given his 3.4 assists compared to Bullock’s 1.5. He also contains the ability to drive to the rim, which allows them to pick up more fouls, attempting 3.3 free throws per game compared to Reggie’s 0.8.

While their three-point shooting is eerily similar at around 41%, in almost every other category, Fournier has double the statistics that Bullock put up last year, indicating he is deserving of the contract. $20 million per season might be in overpay for a complementary piece, but Fournier is capable of taking pressure off Julius Randle and allowing him to operate, especially during the postseason when all eyes are on him.

Fournier should offer a great pairing with RJ Barrett, with his ability to space the floor and open up lanes for Barrett to drive to the rim. Ultimately, his ability to create shots for himself and open up opportunities for others is why the Knicks elected to sign him over retaining Bullock. However, the front office showed their loyalty, bring back Nerlens Noel, Alec Burks, and Derrick Rose on three-year deals.

We should expect about double the production from the Frenchman compared to Bullock, which correlated directly to his price tag.