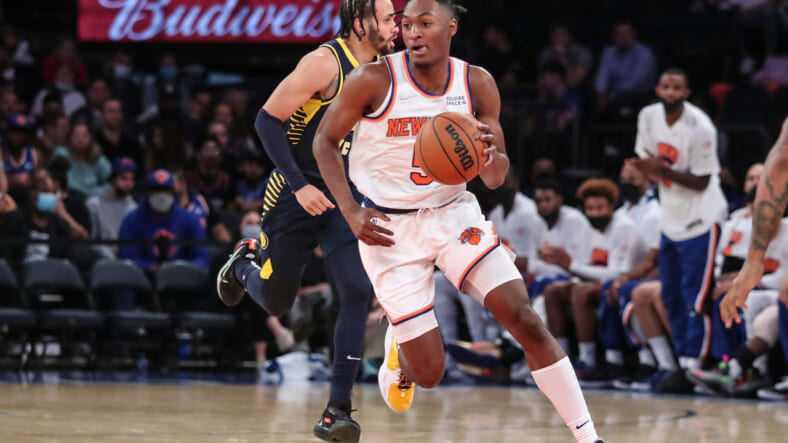 The New York Knicks are depending on veteran point guards Derrick Rose and Kemba Walker to hold them over for the 2021â€“22 season, but their long-term plans include Miles McBride and Immanuel Quickley.

McBride will likely spend the majority of his rookie season on the bench developing his skills, but Quickley already has a year of experience under his belt, and heâ€™s looking to improve in his sophomore season. Last year, Quickley contributed 11.4 points, 2.0 assists, and shot 39.5% from the field. He impressively connected on 39% of his three-point shots, attempting 4.7 per game.

Quickleyâ€™s growth was a massive indication of better draft evaluations from the new front office, and that seems to have rolled over into their second year of management.

Quickley’s growth won’t be impacted negatively by veterans on the team:

Rose was asked about his presence potentially disrupting Immanuelâ€™s growth, to which he gave a great response.

â€œPeople were kind of worried about me coming in stunting Quickâ€™s growth. Coming in, I just wanted them to play free and understand that if they get the ball, they donâ€™t have to look for me. Iâ€™ll find a way to do my thing while Iâ€™m on the floor or try to affect the game in my little way without hurting or stunting someoneâ€™s growth.â€

Head coach Tom Thibodeau loves the versatility and scoring efficiency that Quickley brings to the team and pairing him on the second unit with Rose and Alec Burks will provide a very unique look for opposing defenses.

â€œThe great value with (Quickley) is that he plays with Derrick and Alec, and so really the point (guard) is interchangeable with those guys. They move the ball and they make plays for each other real well,â€ Thibodeau said, via Fred Katz of The Athletic. â€œSo, oftentimes, Quickley will bring it up. Derrick will bring it up. Alec could bring it up or weâ€™ll get into dribble-handoffs. â€¦ Weâ€™re gonna fly around.â€

Last season, one of the more exciting duos was Rose and Quickley on the court simultaneously. They were able to work off one another very nicely, while Rose allowed Quickley to operate in space and take shots without interrupting his flow. The veteran PG is still finding his place on the team with the acquisition of Walker, but having him on the court with Quickley will give Thibodeau confidence in this second team.

In the most recent preseason game against the Indiana Pacers, Quickley connected on four shots over ten attempts, missing all four three-pointers. However, he did distribute the ball nicely, picking up seven assists and six rebounds. His facilitation has been excellent all off-season, averaging 7.8 assists during Summer League play.

The youngster has developed nicely when it comes to distributing the ball and finding his teammates, which he struggled with at times last year in his rookie season. Seeing those skills develop is a great sign for the future, and he has plenty of time to refine his talents until it is his chance to take over the starting point guard job if the Knicks see fit.