Knicks’ Immanuel Quickley has one secret ingredient to playing well 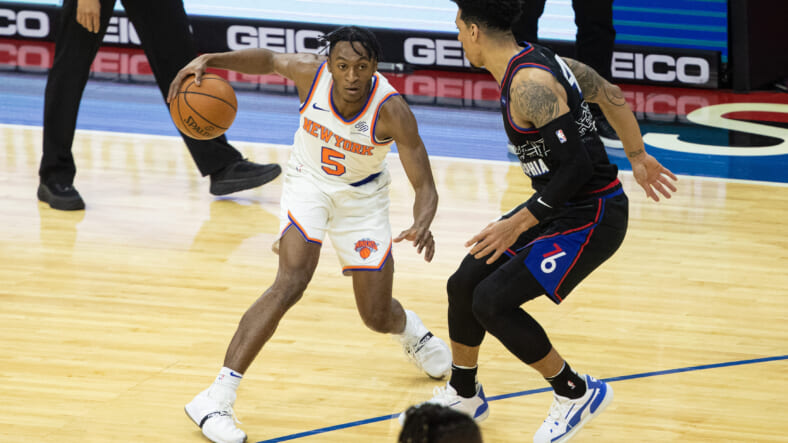 One of the main reasons the New York Knicks are having such a successful 2021 campaign is rookie Immanuel Quickley, who offers fantastic scoring production off the bench. When Quickley was selected, nobody expected him to be this influential, as CBS gave the pick a D+ at 25. However, the Knicks knew they were getting something special, a hard-working youngster who would stop at nothing to be great.

So far this season, Quickley is averaging 11.7 points, 2.1 assists, and 2.2 rebounds over 19.5 minutes per game. He has a .394 field-goal percentage and is connecting on .387% of his shots from three-point range. He attempts 4.8 shots be on the arc per contest and is hitting nearly 90% of his free-throw attempts, which is absolutely stellar.

Quickley has shown that he has a bright future at the NBA level, already making an impact as a late first-round pick. In fact, the Knicks are still dabbling with the idea that he could be their future point guard, but he might be better suited as a shooting guard paired with a veteran like Derrick Rose. He has far outperformed his fellow rookie Obi Toppin so far this season, but his main ingredient to success is exactly what you would think it would be.

â€œI always try to go in and play free,â€ Quickley said. â€œHaving fun is probably the biggest thing I emphasize every time Iâ€™m on the floor.â€

Having fun is Immanuel’s primary way of developing and enjoying the game of basketball. A lot of players get wrapped up in the monetary aspect or the tangible offerings, but Quickley simply loves the game.

To be the best, you have to captivate an internal flame that keeps you motivated and confident. Quickley has the mentality of Kobe Bryant, heaving up shots after hours to improve his abilities come game time. Even fellow youngster RJ Barrett has noticed his trends and projected motivating words on his influence late in games.

â€œHeâ€™s big time, especially in the fourth,â€ RJ Barrett said. â€œHe really gave us a good push there, got us a good lead kind of on his own. He got going, we were looking for him and he just continued to deliver.â€

The Knicks are developing a strong core of youth players, and after years of poor drafting, it seems as if they finally had a few home runs. Barrett is well on his way to becoming a star player this season paired with Julius Randle, and Quickley is already a complementary benefactor. Hopefully, things continue to progress as they have been, and the front office it will be quite happy with their draft picks the past few years.