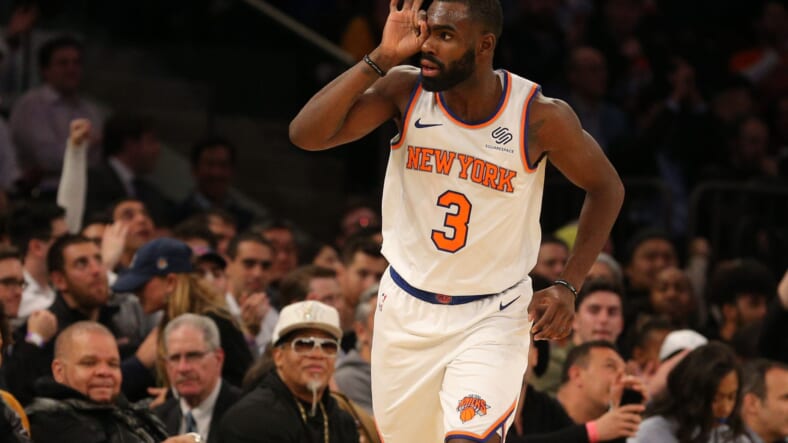 The New York Knicks snap their six game losing streak on the back end of a back-to-back, on the road in Boston, as they held the lead from wire-to-wire against their Eastern Conference foes, 117-109.

There is no doubt that from a Knicks fan’s perspective, every game in the 2018 season is an emotional rollercoaster. It begins with checking your sources just a couple of hours on game-day to investigate what the Knicks first year head coach, David Fizdale, has cooked up for the starting lineup. It’s clear that the youngest team in the NBA is trying to figure out…simply put…how to play in the NBA on the fly. Meanwhile,Â the Knicks first year coach is also growing and learning, as Coach Fiz is on an endeavor to determine who can consistently handle their defensive assignments, create good pace on the offense, and of course, keep the game competitive.

The Knicks rolled out a new but familiar lineup against the Boston Celtics, on the front end of their back-back at home against the Portland Blazers; Emmanuel Mudiay, Mario Hezonja, Tim Hardaway Jr., Noah Vonleh, and Enes Kanter. The game was extremely competitive and went down to the wire verses the Blazers, coming on the shoulders of big games from Hardaway, Kanter, Vonleh, Burke, and unfortunately some key missed free throws down the stretch. This time around, the Knicks had the lead from wire-to-wire and escaped with a win. Although the game looked aesthetically different (and more pleasing) than the Blazers game, it was actually quite similar. Thankfully, the key missed free throws down the stretch didn’t cost the Knicks this time around. Now that’s what I call progress.

Today’s game against Boston started at about 7:30pm Eastern Time, shortly after the conclusion of the thrilling NCAA Maui Invitational Finals featuring Duke and Gonzaga, where the NCAA is doing their part in keeping the Knicks fanbase active and interested in basketball, during this rebuilding 2018-2019 NBA season.

This is the same Boston Celtics team that the Knicks played earlier in the season, falling just short 103-101 in overtime, where rookie Kevin Knox hurt his ankle. In late October, the Knicks were led byÂ Hardaway’s 24 points, Kanter and Vonleh double-doubles, and Burke adding 11 points. Unfortunately last game verse the Celtics, Burke was unable to capitalize on game ending free throws, from a late game blunder on a 3-point foul by Jason Tatum.

This time around, the Knicks went on the road to Boston, following a back-to-back, and were led by Trey Burke’s 29 points and 11 assists, double-doubles by Vonleh and Kanter, Tim Hardaway Jr’s 21 points, Mitchell Robinson’s 6 blocks and interior defense, as well as the efficient rookie performances from Knox and Iso-Zo. Those 6 blocks by Robinson are not an aberration, as the 2nd round pick who took a year off from organized basketball, Â now has 4 blocks per 36 minutes and sits at 6th in the NBA in blocks, averaging 2 per game, according to NBA.com. Trey Burke became the first Knicks player with 25 points and 10 assists off the bench since Knicks fanbase favorite John Starks did so in March of 1992 against the Chicago Bulls, according to ESPN Stats & Info. Not too shabby for the undrafted guard from Arizona…

The end result does not tell the full story of this game, as has been the story for a majority of New York’s games this season. With a sizable lead for most of the game that ballooned up to 26, and was maintained from wire-to-wire, this game came down to crunch time. This time Trey Burke redeemed himself and was able to knock down a dagger 3 pointer to put the nail in the coffin against their Atlantic Division rivals.

Could not have said it better myself Coach. Every minute that passed by in the second half was another opportunity for the veterans on Boston to take control of the game and send the youngest team in the NBA reeling into thanksgiving with a 7 game losing streak. Both teams needed this game badly for their morale. Let’s not forget this is not NBA2K or pawns on a chess board, these are real human’s with sometimes fragileÂ emotions and egos that are constantly fluctuating, due to chemistry and consistency.

Say what you will about this 2018 tankathon New York Knicks team, but the majority of the time, the effort is noticeable. That could be attributed to the countless off-the-court efforts Coach Fiz is implementing in the team with motivational speakers and tweaking lineups, but the players also deserve a share of the credit. The lineup changes can’t be helping. But Coach was quick to compliment the team’s effort and maturity during the 2nd half of this ballgame, and most importantly noted that the young KnicksÂ didn’t ty and make up the deficit with one play.

As the New York Knicks organization and their fans enjoy some family time today and watch some football with their day off from basketball, everyone can can smile because the State of the Tank is proceeding better than expected. The focus must remain narrow towards the goal, to be one of the three bottom teams in the NBA. The new NBA Draft lottery rules give the teams with the three worst regular season records, the same odds Â in getting the grand prize of Zion Williamson, or the great Duke consolation prizes in R.J. Barrett and Cameron Reddish, Bol Bol from Oregon, Nassir Little from North Carolina, Quentin Grimes from Kansas, and Keldon Johnson from Kentucky (Thanks Adam Silver, just don’t forget to freeze the envelope).

New Orleans Pelicans and Anthony Davis come visit the World’s Most Famous Arena on Friday for the second game against the Pelicans. The two team’s faced off in New Orleans on the 16th, where the Knicks fell short by 5 points, giving up an 11 point 4th quarter lead and forfeiting 47 points and 17 rebounds to the Brow.