Knicks finally execute, selecting Quentin Grimes with the 25th overall pick, what does he bring? 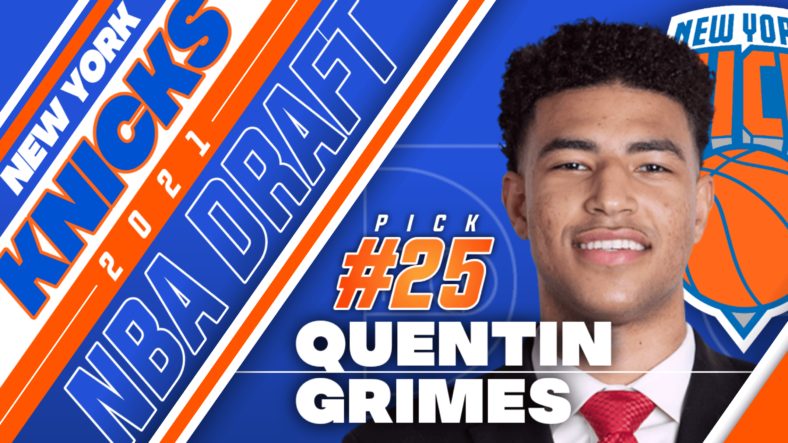 After trading away the 19th and 21st overall picks, the New York Knicks finally landed a player with the 25th overall selection. Passing on several point guards, including Miles McBride and Sharife Cooper, the front office decided on Houston sharpshooter Quentin Grimes.

The Knicks are on the board at No. 25 and they're targeting Quentin Grimes, per sources.

The Knicks worked Grimes out several days ago, as the 6’4″ shooting guard impressed. Having transferred from Kansas to Houston in 2019, he has been on their radar for quite some time. As of a month ago, he was expected to be a late first-round or early second-round selection, so landing him at 25 could be a bit premature.

Nonetheless, Grimes is a high-end shooter, averaging 17.8 points last season with Houston. He connected on 40% of his 8.3 times from three, providing essential shooting with five veterans expected to hit free agency this off-season. Averaging 32.8 minutes per game, heâ€™s clearly ready to make the transition to the NBA.

The Knicks were reportedly interested in Chris Duarte out of Oregon earlier in the draft, but he was taken well before their selection. Grimes offers a solid 3-and-D wing, who contributed 1.4 steals last season, a career-high.

Quentin Grimes this past season:

The Knicks have the 32nd and 58th overall picks, so they can address the point guard position shortly.