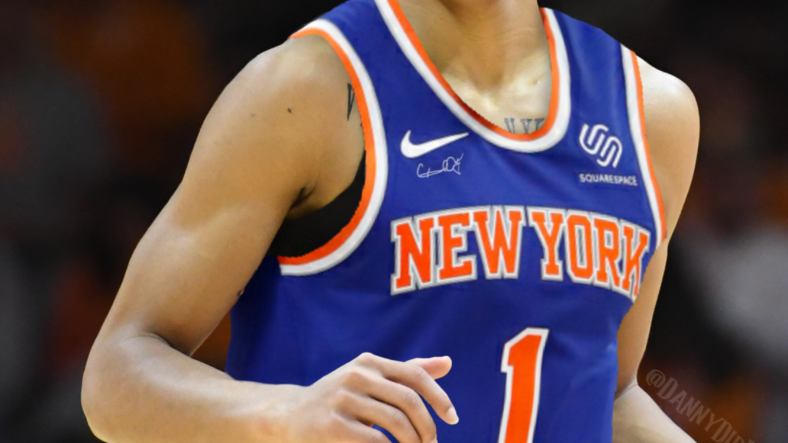 The New York Knicks are trying to find a trade partner in the 2020 NBA draft. Having explored the idea of moving up with the Golden State Warriors, the team is trying to package their first-round picks together to move up into the late lottery.

Teams simply arenâ€™t interested in moving back into the 20s, as several quality prospects reside in the top 15 selections. As for the Knicks, they sit tight and stick with their guns in this scenario, spending their picks on several different players.

The Knicks have been connected to shooting guard Trey Murphy recently. Murphy presents a fantastic physical profile as he prepares to transition to the NBA. At 6’8″ and 206 pounds, he has a 7-foot wingspan that resembles similar measurements to Jayson Tatum.

As a solid defensive player and scorer, he fits the 3-and-D mold perfectly for Tom Thibodeau. Having spent three seasons at the collegiate level with Rice and Virginia, Murphy has plenty of experience. Murphy averaged 11.3 points, 3.4 rebounds and shot 50% from the field this past season. An even more exciting statistic, he connected on 43% of his shots from three, showcasing his prowess as a shooter.

Some of his weaknesses include a lack of physicality, but that is something he can improve on as his frame fills out. Murphy is 21-years-old, presenting a younger option than Chris Duarte, who will be turning 24.

Knicks need a point guard desperately in the draft and one that preferably can create shots for others and himself. Tre Mann could be the perfect fit for the Knicks with the 21st overall pick.

Mann is a smooth ball handler that creates space, which inevitably forces defenders out of position and opens up shots for his teammates. He is a purebred scorer, shooting over 40% from three and ranked in the 90th percentile in pull-up jumpers last season.

While his defense lacks physicality and aggressiveness, heâ€™s a player Thibodeau can depend on to open up the floor and offer scoring process. If Mann can improve defensively and add more court vision to his game, he could develop into a solid starting PG.

The Knicks struggled considerably in the paint during the postseason due to a lack of physicality. Rolling with Nerlens Noel and Taj Gibson, they could use another center who plays with aggression. North Carolina big man Dayâ€™Ron Sharpe fits the bill perfectly.

Traditionally, physically imposing big men arenâ€™t necessary in the NBA anymore, but having one as a reserve center could pay dividends against more disruptive interior defenders. Having played just one season with UNC, the 6’11”, 265-pound center is a bruiser and is solid around the rim. Heâ€™s a traditional low post scorer but doesnâ€™t offer much as a shooter. The Knicks donâ€™t depend on their centers to offer much in the scoring department but rather contribute consistent defense.

His strengths include rebounding, shot-blocking, but struggles with on-ball defending. If he is still available with a 32nd overall pick, he would be a great fit behind Robinson, adding a physical presence the Knicks donâ€™t have.

Having addressed the center and guard positions, the Knicks take a flyer on Santi Aldama out of Loyola with the 58 overall pick. Standing at 6’11” and 215 pounds, Aldama averaged 21.2 points, 2.3 assists, and 10.1 rebounds this past season. He connected on 51% of his shots from the field and nearly 37% from range.

Aldama has the potential to become a stretch-four player, showcasing solid scoring abilities in the post and from the field. Overall, he seems to be an average player all around with potential but does have streaky moments with his shooting. He hasnâ€™t enjoyed many games against top-tier college teams but dominated with Loyola, giving him some ground to stand on.