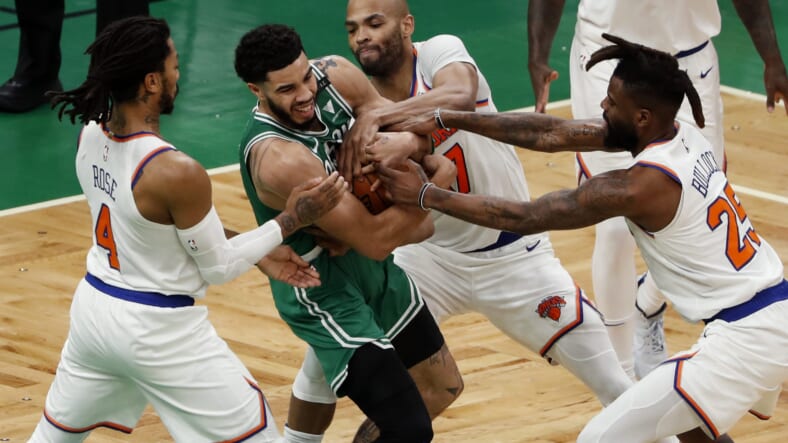 Up by seven points with eight minutes and 12 seconds left on the clock, the New York Knicks once again blew a healthy lead to lose the game. After falling to the Brooklyn Nets by two points on Monday evening, they replicated their loss against the Celtics on Wednesday, falling by two points and failing yet again to close out a competitive game.

The Knicks went into Wednesday tied with Boston in the Atlantic standings but gave them a one-game advantage in the defeat. While most would consider this matchup another classic between two rival cities, the Knicks are looking themselves in the mirror as their own opponent.

Thereâ€™s no question that New York has played incredible defense with impressive tenacity, but their offense continues to fail them when it counts the most in the fourth quarter.

While 20-year-old guard RJ Barrett finished with 29 points, a costly turnover in the final minutes gave Boston a slight advantage. He returned the favor with a three-pointer, but the Knicks once again failed to get the ball in the hands of the right player, taking a premature shot with more than 20 seconds on the clock down by three points.

After Julius Randle missed a game-tying shot against Brooklyn on Monday, the Knicks put the ball in the hands of Alec Burks, who missed a three-pointer with 22 seconds left and was blocked shortly after trying to drive the lane with 10 seconds left in the loss. On the year, the Knicks are 2â€“8 in games decided by three points or fewer — a disappointing statistic that head coach Tom Thibodeau needs to fix.

Losses like this beg the question, should the Knicks have been more active at the trade deadline?

While I believe they have the talent to get it done, every close loss watches their playoff hopes dwindle just a little bit more. Whether it be fatigue or bad shooting, the Knicks falter in numerous categories. One costly negative is the fact that they donâ€™t have a single player in the top-50 of three-point shooting efficiency when a team like Brooklyn has three.

Defense will only take you so far, and eventually, if New York can pair their incredible aggression on D with a tantalizing offense averaging over 110 points per game, they will be in good shape. But for now, the Knicks’ biggest opponent is none other than themselves.