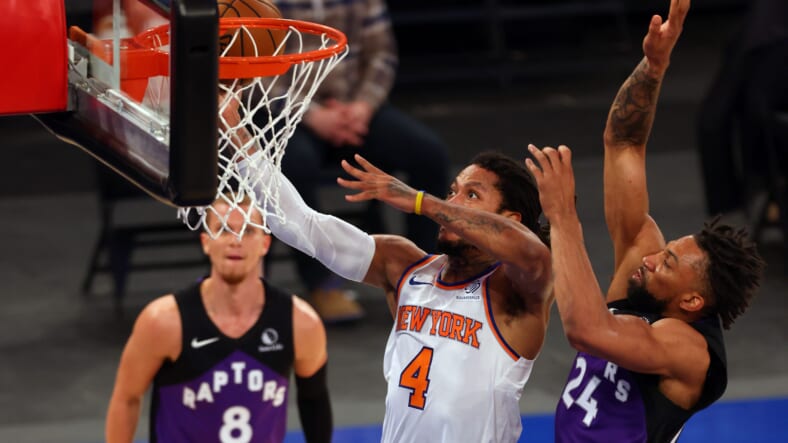 The New York Knicks have a difficult test against the Toronto Raptors on Saturday afternoon, as the team, they will be playing now is a bit different than the one they played a few weeks back. The last time the Knicks played Toronto, on April 11, they were without Kyle VanVleet, their star guard.

In addition, Kyle Lowry was nursing a foot injury, which he appears to be free of now. Toronto has been holding out Pascal Siakam, VanVleet, and Lowry for rest-related purposes, but they are all a GO for Saturdayâ€™s game.

The Knicks, on the other hand, are dealing with a few injuries, as Alec Burks is still going through the league’s safety and health protocols. Burks came down with a case of COVID-19, and while it is unknown whether heâ€™s experiencing symptoms or not, he will have to sit out for the next couple of days, if not weeks.

In the meantime, the Knicks are currently on an eight-game win streak, led by All-Star Julius Randle and a vintage Derrick Rose. We shouldnâ€™t forget about second-year guard RJ Barrett, who has been scoring double-digit points consistently the past few weeks. As for center Nerlens Noel, who was caught by a stray elbow in their most recent win over the Atlanta Hawks, will wear a mask of sorts against Toronto.

However, the Knicks cannot sleep on this team, as they have a majority of their squad healthy and ready to go after a few rest days. With the Knicks’ recent form, though, they host the best defense in the NBA, averaging 104.7 points allowed per game. They own sole possession of the 4th seed, with .5 games over Atlanta and Boston. A victory over Toronto would not only give them a nice cushion to work with but would continue an excellent streak of shooting and overall performance.

Hopefully, Tom Thibodeauâ€™s blackout day after the win against Atlanta doesnâ€™t have any effect on their recent success. The team did deserve a day off, as theyâ€™ve been working tirelessly to put up shots on their off time and prepare for the next game.