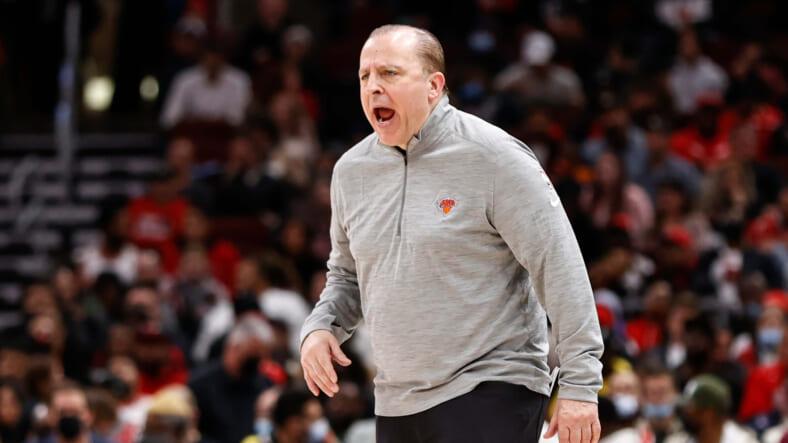 There is not a single team in the NBA that is shooting above 40% from three point range, as the Knicks currently sit 4th at 37.6% before their loss of the Cleveland Cavaliers on Sunday evening. However, over the last few games, the Knicks have experienced a degrading defensive situation; perimeter guarding has become a serious issue.

Opposing teams are quickly figuring out that to beat the Knicks you must shoot from deep, and it has worked like a charm over the last four games, despite the Knicks pulling out a resilient win over the Milwaukee Bucks on Friday. However, New Yorkâ€™s defense is not reminiscent of the 2020 team, and head coach Tom Thibodeau will have to find a solution for the lack of effort and positioning.

Letâ€™s take a look at just how poor the Knicks have defended the three-ball over the last four games, in which theyâ€™ve lost three.

In the Knicks last four games, this is their 3-PT percentage allowed:

As stated above, thereâ€™s not a single team in the NBA that is shooting about 40%, but the Knicks are allowing an average of 40.95% from three over the last four games. That is an unacceptable number that showcases severe lack of perimeter help.

Against Cleveland, there was a bit of an anomaly, as a veteran PG Ricky Rubio shot 8-of-9 from three-point range, essentially going parabolic. There was no chance the Knicks would match his efficiency, but they could have offered better defensive positioning to contest the shots. Rubio was heaving up shots without much resilience, which has been a major problem for Thibodeauâ€™s squad to open the year.

Ultimately, it seems as if the Knicks are living and dying by the three on both sides of the ball. When they donâ€™t shoot above 38%, their chances of winning decrease significantly. In addition, they have lost three games at home, an interesting reality for a team that thrived off the fan base last season.

Sequentially, the Knicks simply looked lazy on defense, closing out extremely slow and giving free shots without much energy and buzz. There is a long season ahead, and if the Knicks are already dealing with fatigue issues and carelessness already, more concerns will begin to arise.