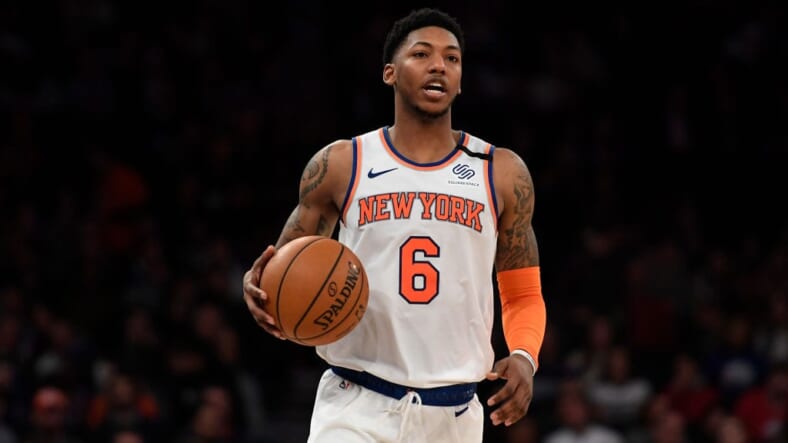 NEW YORK, NEW YORK – JANUARY 18: Elfrid Payton #6 of the New York Knicks dribbles the ball during the second half against the Philadelphia 76ers at Madison Square Garden on January 18, 2020 in New York City. NOTE TO USER: User expressly acknowledges and agrees that, by downloading and or using this photograph, User is consenting to the terms and conditions of the Getty Images License Agreement. (Photo by Sarah Stier/Getty Images)

The New York Knicks currently said 10-13 on the season, but they have played well above their expectations heading into the 2020 campaign. Most expected them to be a struggling team, but head coach Tom Thibodeau is not known for putting together losing squads. In fact, he’s better known for his ability to reach the postseason and execute with his aggressive style of coaching.

Thibodeau demands stellar defense, which is something the Knicks are thriving in this season, despite taking a few weeks to find their sea legs. Composing a group of new faces and a fresh coaching staff is never easy, but the Knicks are once again defeating odds and are just three games back from .500. Most recently, they overcame the Chicago Bulls in the second game of a two-game series. Their defense once again showed up big, overwhelming Chicago and allowing players like RJ Barrett and Julius Randle to dominate in transition and take high-probability shots.

One player who has emerged as a consistent option is point guard Elfrid Payton. Payton signed a one-year, $5 million deal this past off-season with New York, and while he lacks the consistency to be a dominant PG in the NBA, he is a solid defender and makes flashy plays on occasion. He provides Thibodeau with exactly what he asks, defensive prowess, and the ability to run the offenses with pace.

Payton did state that the team is making significant progress, but it was never an overnight thing. They needed time together to refine their abilities and build chemistry, and it is finally taking hold in-game.

â€œStuff takes time,â€ Payton said after the Knicks’ win over Chicago on Wednesday evening. â€œEverybody, we live in a world, they want stuff so instant. It takes time to learn people, it takes time for things to work. So I think playing a whole year together, learning each other, learning each otherâ€™s strength, working on their games, I think youâ€™re seeing the fruits of their labor. Sometimes youâ€™ve got to take a few Lâ€™s.â€

The expectation is that the Knicks will continue to improve, especially as rookies Obi Toppin and Immanuel Quickley adapt to the league. The only way is up, and with stellar coaching and potential personnel decisions on the way, we should be optimistic about the teams future for the first time in years.

â€œEveryoneâ€™s role is different,â€ Thibodeau said. â€œSome guys play more than others. Some guys are just there to be ready when the opportunity comes. And it will come. Thatâ€™s sort of the nature of this league. When that opportunity comes, be ready to go in and help the team.