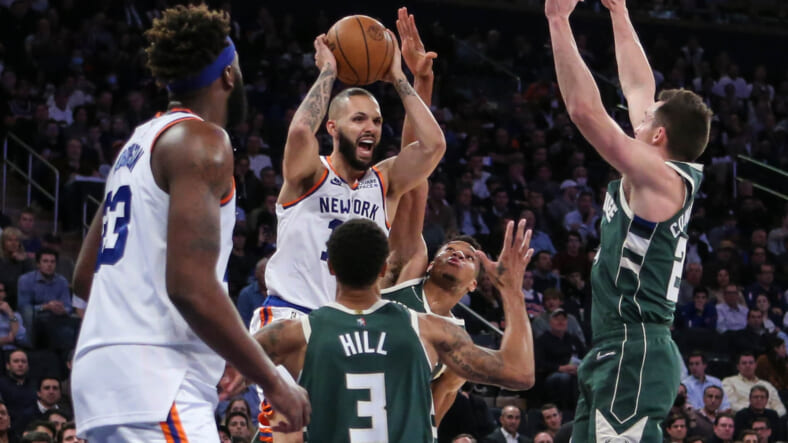 The New York Knicks may be one of the most efficient scoring teams in the NBA, but they have hit a dry patch the past few games, specifically with their starters. A lack of ball movement has become apparent with the first team, as the Knicks rank 23rd in assists per game with 21.8. Their failure to move the ball well and play off one another has become a serious problem that is worth diving into.

Luckily, the team had two days off over the weekend preparing for the Indiana Pacers on Monday night. The Pacers have a few quality pieces and have won three of their last four games. New York needs their starting unit to come out with a revived sense of chemistry, which head coach Tom Thibodeau was trying to create during practice.

â€œThe first group, they were doing a lot of play sets, moving the ball from one side to another, finding each other, talking,â€ Derrick Rose said. â€œThatâ€™s what we need. Especially on the road in the hostile environment where itâ€™s hard. You got to be able to communicate and talk and be on the same page. Thatâ€™s what we need.â€

Rose detailed how the first team was trying to move the ball efficiently around the court and play off one another instead of forcing isolation opportunities. Power forward Julius Randle has been taking too many low-percentage shots and not spreading the ball effectively instead of finding an open man and collapsing the defense.

The chemistry is still building between some of the players, notably Randle and point guard Kemba Walker, but that is no excuse for lack of effort and passing.

â€œItâ€™s easy to nitpick,â€ Thibodeau said, via the NY Post. â€œIn all fairness to Julius and Kemba, because of who they are, they probably get the brunt of whatâ€™s going on. The reality is we have to play well together as a group. Itâ€™s not one, two guys. We can say new guys, old guys. We can say first unit, second unit. We can say Kemba. The whole thing is we need our team as everyone together. Thatâ€™s where the focus has to lie.â€Â

Thibodeau hit it right on the head. The team needs to be playing together as a cohesive unit, whereas theyâ€™ve been relying on individual performances to compensate for the lack of scoring and defense. The second team has been far more effective, primarily because of veteran PG Derrick Rose and his floor manager approach. Rose has excelled in transition with Obi Toppin, and they have passed efficiently, something the first team has struggled with.

The priority against Indiana will be to spread the ball, collapse the defense, and kick it out to open shooters. It is time to put away the isolation moves unless there are significant matchup deficiencies on the other side of the ball. However, Thibodeau used a facilitating practice strategy to hopefully curate more ball movement on Monday night.