Knicks’ Damyean Dotson must become a consistent part of the rotation 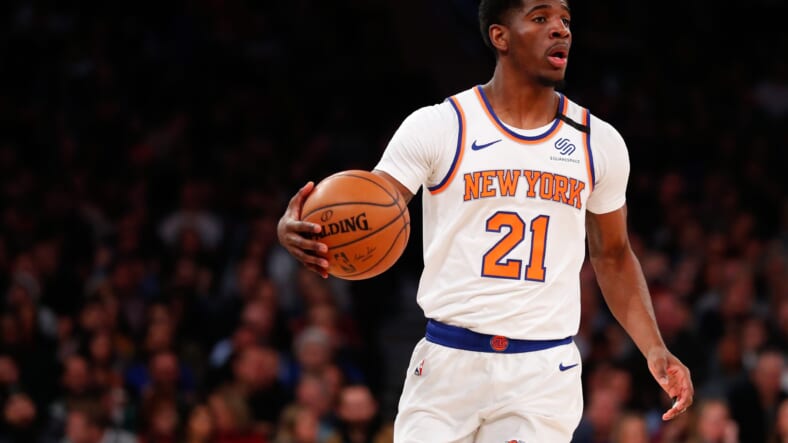 The New York Knicks seem to be ready for some dramatic changes this offseason. After overhauling their front office, the Knicks are now in the midst of a head coaching search. Once the Knicks find their coach, we should expect a roster transformation to unfold.

The Knicks have multiple picks in the 2020 Draft, cap space to place with, and plenty of team options with their current roster. Long story short: They can make significant changes to their roster this offseason.

One recurring theme amongst analysts and Knicks fans is a plead for the Knicks to upgrade their 3-point shooting. The team currently ranks 4th worst in 3-point field goal percentage, on top of attempting the second-fewest 3 pointers in the league. While the Knicks will look to improve that area through the draft and free agency, they already have one potential answer on their roster in Damyean Dotson.

The 26-year-old Dotson has a player profile that is coveted throughout the league: A 3-and-D wing player. Dotson has been a good 3-point shooter throughout his short career. This past season, his 38.9% on catch and shoot 3s was third-best on the team behind Allonzo Trier and Wayne Ellington.

Dotson not only brings good shooting and floor spacing on offense, but he has also shown the capability to be the Knicks’ best perimeter defender. Dotson’s stocky frame allows him to compete with bigger wings, as well as out-muscle guards on the perimeter. He has great instincts on defense and can be tasked with guarding difficult assignments.

Dotson had trouble finding any consistent playing time this past season. He received multiple DNPs before the season was suspended. There have already been rumors that multiple teams will be interested in adding Dotson and developing him if the Knicks were to let him go.

The Knicks have a 3-and-D winger in Dotson who can be an essential role player in the modern NBA. He has done more than just flash potential and should be given the opportunity to play 20 minutes every night for the team. Hopefully, the Knicks give him that opportunity.