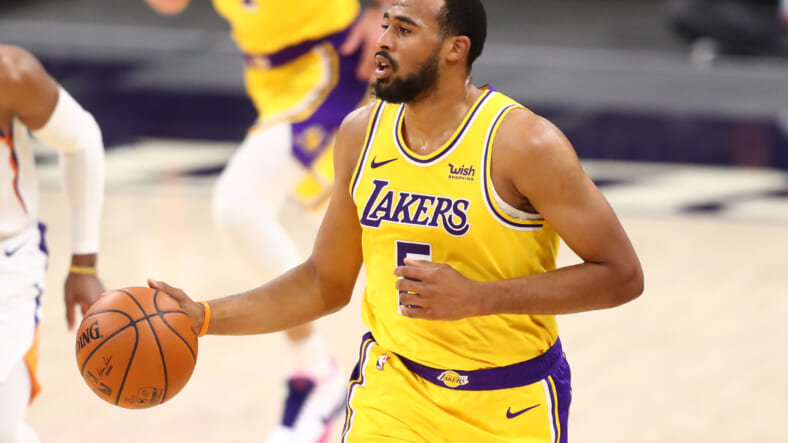 The New York Knicks need talent wherever they can get it, especially with injuries plaguing the team at the moment. However, there is a free agent target they could look to as a potential solution in 2021.

While heâ€™s not a well-known player yet, former second-round pick Talen Horton-Tucker has made tremendous progress with the Los Angeles Lakers. As the 46th pick in 2019, he doesnâ€™t have a guaranteed contract just yet with Los Angeles, and with the Lakersâ€™ deep rotation at guard, they might have no choice but to let Horton-Tucker walk this upcoming off-season.

One team that should 100% be in on him are the Knicks, who have inconsistent youth and several veterans trying to find their spot on the team.

Horton-Tucker has only played in 10 games this year, averaging 8.1 points, 2.6 rebounds, and 1.8 assists. However, he hasnâ€™t disappointed while on the floor, seeing improvement as a shooter and solid vision on the court.

According to Sean Deveney of Heavy.com, the Mavericks, Knicks and Cavaliers could all target Horton-Tucker.

â€œLeague sources told Heavy.com Horton-Tucker can expect â€˜multiple teamsâ€™ to have an interest in pursuing him this summer,â€ Deveney wrote. â€œThat would put pressure on the Lakers to match some offers that could, potentially, be very hefty. The Knicks, Cavaliers and Mavericks were listed as teams with potential interest.â€

Considering heâ€™s learning under LeBron James, Talen has the potential to be a fantastic player in the future. Over a four-game stretch, he averaged 20+ points at one point this season, and as a mature player with smart basketball knowledge, he would fit like a glove in New York.

The expectation is that Horton-Tucker could earn in the $10 million range, and considering the Knicks desperately need more adequate shooters, he could fit the bill well. He has a .484 field goal percentage this year and is shooting .364 from downtown. While heâ€™s only connected on 10 of 22 from three, heâ€™s also an aggressive defensive player, which is exactly what head coach Tom Thibodeau is looking for.