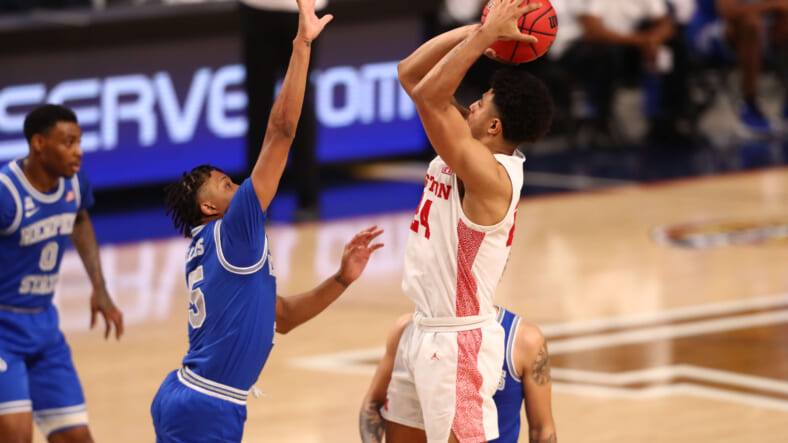 With shooting guard/small forward Reggie Bullock preparing to hit the open market, the New York Knicks could be looking for a supplement in the NBA Draft. With just six days before the team has to make a decision on their draft selections, with three first-round picks, one player that has recently worked out with the Knicks is Houstonâ€™s, Quentin Grimes.

The Knicks reportedly worked out Virginia swingman Trey Murphy III on Tuesday, but The Post has learned that another wing who can shoot and defend wowed team brass two weeks ago at their Tarrytown facility.

Quentin Grimes, the 6-foot-4 shooting guard who transferred from Kansas to Houston in 2019, is on the Knicksâ€™ radar with one of their first-round picks (No. 19 or No. 21) in the July 29 NBA draft.

A month ago, Grimes was thought to be more likely to be selected in the very late first-round or early second round. The Knicks have the 32nd pick (second in the second round), but it looks doubtful Grimes, a junior, will still be there.

Houston's Quentin Grimes has been one of the big winners of the week after leading the NBA Combine in scoring. He continued that momentum at his Pro Day yesterday with plenty of NBA executives in attendance. pic.twitter.com/njxmbsIOn8

Three years ago, Grimes was the No. 8 overall player in the ESPN Top 100, considered to be a one-and-done player at the college level. He was a five-star McDonaldâ€™s All-American player who ended up playing three years at the collegiate level. He spent time with Kansas and the past two seasons with Houston, elevating his game tremendously this past year over 30 contests. He averaged 17.8 points, 1.4 steals, 5.7 rebounds, and shot 40% from the field. His most impressive statistic, though, was his 40% shooting from range over 8.3 attempts per game.

Shooting so well with a high clip is exactly why the Knicks are considering him in the draft, despite him being projected as a second-round pick. After his solid workout and fantastic Combine performance, he is rising among prospects on the draft board and could find himself as a potential target with a 32nd overall pick, which the Knicks hold.

Reports have indicated that the front office is looking to package selections together and move up as high as possible, but that doesnâ€™t guarantee they will utilize all three selections to move up. The Knicks could theoretically package two of their first-round picks together and still target a player like Grimes at the end of the first round.

According to Slam Online, Grimes gained essential knowledge from one of the league’s best offense of players, James Harden. The pre-draft process allowed him access to Harden, who often worked out at Houstonâ€™s facilities, which Grimes took advantage of.

â€œJust watching him in our gym to see what he works on, to see how that translates to the NBA game. Just trying to take his work ethic really and just try to be one of the best players in the League, hopefully, I can be that one day,â€ Grimes says over Zoom.

At 21 years old, Grimes has plenty of untapped potential, and the Knicks could be looking for him to make an impact during his rookie season as a lethal sharpshooter.