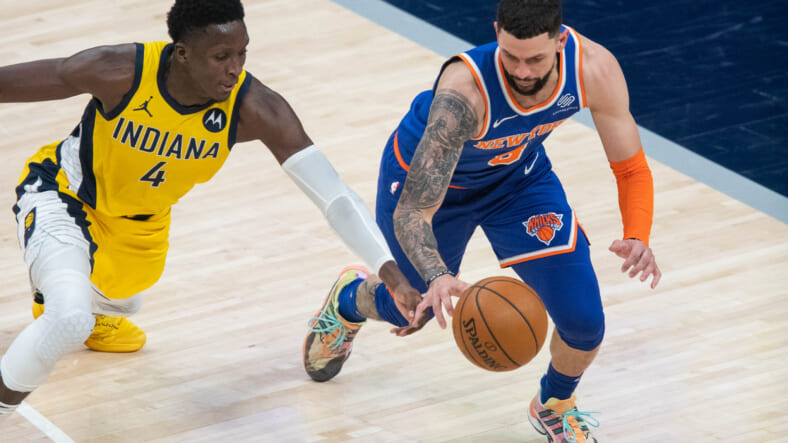 The New York Knicks have been making gradual changes to their roster, notably the acquisition of Derrick Rose and Taj Gibson. Both have been influential in the team’s recent success, but other players have been left in the dust as a result of these moves.

For example, the moment the Knicks acquired Rose, shooting guard Austin Rivers took a backseat. Since February 9, Rivers has only made two appearances and spent just under five minutes on the court. An unfortunate byproduct of acquiring Derrick, who has a close relationship with Tom Thibodeau and offers a bit more offensive prowess than Rivers.

“I think that was an assumed thing already when Derrick came. So I already understood and I know thatâ€™s [Tom Thibodeau‘s] guy,” said Rivers. “Heâ€™s been with Derrick and Derrickâ€™s a heck of a player so, again, we had our conversation there and thatâ€™s going to stay [in house].”

Rivers fully understands that Rose was ultimately going to earn more playing time, considering the former Houston Rocket is averaging 7.3 points per game this season while Rose is offering 10.9 over 21.3 minutes, a very similar number (minutes) to Rivers this far.

In addition, Rose is producing double the amount of assists, indicating a more vision-oriented player who can pick out transition runners and big men in the paint. Nonetheless, Rivers plans to remain focused and ready for another opportunity, which hopefully will present itself at some point.

“Every day that Iâ€™m here Iâ€™m always going to be all in,” he said. “I actually like all the guys on this team. We have great guys on this team. And because you never know. Maybe they might need me to play or whatever. Crazy things have happened. Iâ€™ve seen it all. So thatâ€™s kind of my attitude toward this. Just control what I can control, continue to get better, continue to stay ready.”

If there is one reason to be OK with this move, itâ€™s that Rivers signed a three-year deal with the Knicks this past offseason, so he will likely have an opportunity in the near future. Rose is only signed for the rest of the 2021 campaign, and his primary focus should be mentoring Immanuel Quickley and preparing him to be the future point guard for the team.