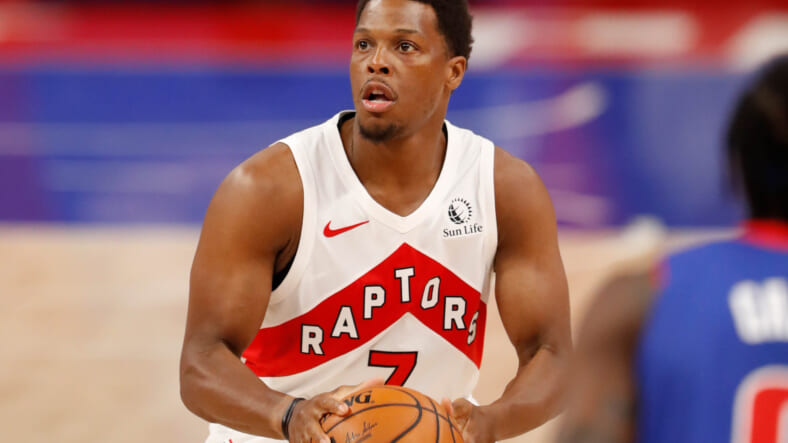 Finding a solid veteran point guard will be a priority for the New York Knicks in August as they scour the free-agent market. With several options available, one who stands out is former Toronto Raptors PG Kyle Lowry.

While Lowry may not be a perfect fit with the Knicks, he closely resembles the 36th overall selection Miles McBride out of West Virginia. McBride has been compared to Lowry in the past, playing fearless defense but also elevating his team as a scoring option too.

â€œI definitely honored to have my playing style compared to Kyle Lowry,â€™â€™ McBride said on a Zoom call Friday,Â via Marc Berman of The Post. â€œI know heâ€™s led the league in charges and Iâ€™m willing to do anything to win. Thatâ€™s something I certainly can get behind.â€

McBride is known as a tough player, featuring as a former high school quarterback and leader on the basketball court. Tom Thibodeau loved what he saw from McBride during the pre-draft process, as just several days before, he keyed in on him as a perfect fit to develop.

Last season with West Virginia, the 6’2″, 200-pound guard averaged 15.9 points, 4.8 assists, and shot 43% from the field. He also connected on 41.4% of his shots from three over 3.8 attempts per game. By all standards, McBride offers plenty of value as a defensive player first and foremost but also has tons of offensive potential that could be unlocked by good coaching and a solid veteran mentor above him.

Should the Knicks consider Lowry?

Lowry could fit that bill perfectly, coming off a solid season averaging 17.2 points, 7.3 assessed, and shooting 43.6% from the field. Heâ€™s also a quality three-point shooter, hitting on 40% of his shots over 7.2 attempts per game. Learning from a player like Lowry would undoubtedly elevate McBride and his skill set, especially since heâ€™s been compared to him in the past.

However, Lowryâ€™s coming off what most would consider a down year, playing in just 46 games. At 35 years old, Lowry just finished a one-year, $30.5 million contract and could sign in that price range.

If the Toronto Star is looking for a one-year contract, the Knicks should consider jumping on it, as it would give them the ability to clear space next off-season in 2022 to target a younger long-term solution or star like Bradley Beal. As far as we know, having Lowry ahead of McBride might even help him become a starting player down the line, and opening up more cap space next season would be ideal.

Nonetheless, if the Knicks elect to go that direction, signing Lowry to help develop McBride while also having a solid defensive player and offensive threat at point guard would be a win-win situation.

What do you think about the idea of signing Kyle Lowry? Comment below!