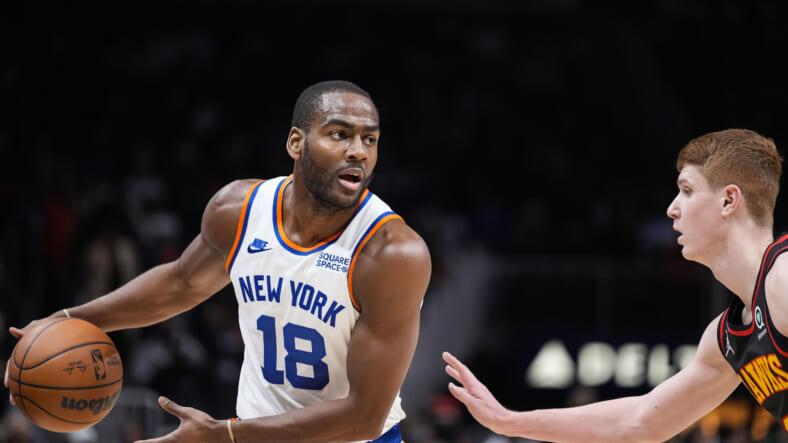 The New York Knicks stepped up against the Atlanta Hawks on Saturday evening, toppling them by the score of 99â€“90. After falling to the Phoenix Suns in a disappointing loss at MSG, the Knicks bounced back with physicality and elite defense, despite playing without Kemba Walker and Derrick Rose.

Thankfully, the starting team posted a far more efficient performance against Atlanta, despite power forward Julius Randle recording just eight points over 31 minutes. However, Evan Fournier and RJ Barrett recorded 18 and 15 apiece, knocking down a combined five 3-PT shots. In the absence of Walker, reserve Alec Burks picked up the start, having one of his most dominant games of the season with 23 points, two steals, three assists, and seven rebounds.

Burks, who has played an instrumental part with the second team, helped secure the win, and his presence mightâ€™ve been even more beneficial than having Walker in the first place. However, the reserves for New York also played a significant role, as Obi Toppin contributed 13 points and Immanuel Quickley 9. Toppin was fantastic in transition, hitting 5-of-8 shots from the field and all three of his free-throw attempts. Quickley acted as a facilitator in this contest, posting 7.0 assists, a season-high for the second-year player.

Head coach Tom Thibodeau indicated that the team lacked effort against Phoenix, but they showed nothing but maximum energy against Atlanta, especially on defense. The Hawks hadnâ€™t dipped below 100 points since before they began a seven-game win streak against the Milwaukee Bucks on November 14.

The Knicks needed a fantastic defense performance to get back on track, and despite giving up 33 points to Trae Young over 39 minutes, they limited some of their more prominent scorers to minimal performances. John Collins posted just 12 points, and Clint Capela recorded 16, but no other player on the team record a double-digit production.

The Knicks will now look ahead to the Brooklyn Nets on Tuesday evening at 7:30 PM, and coming off a dominant win over Atlanta, they will hopefully be able to roll over their performance. They are going to need every ounce of defense against a Nets team that is on fire as of late, relying on Kevin Durant and James Harden to carry the load.