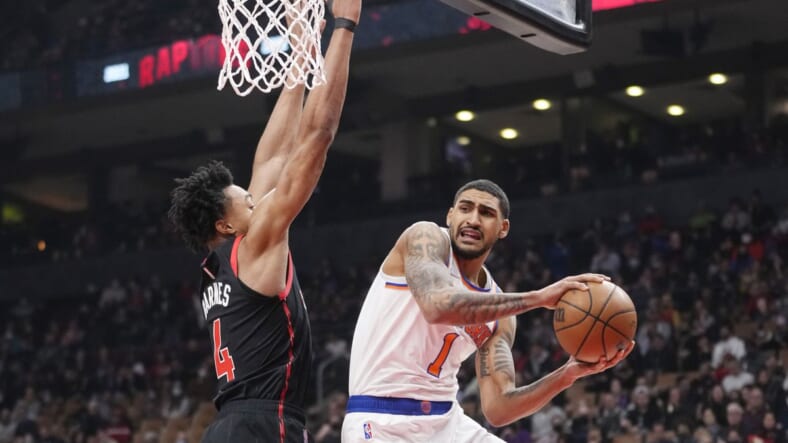 This season, power forward Julius Randle is averaging 35.3 minutes per game, and after being placed on the NBA’s health and safety protocols list, the New York Knicks are going to need to spread his minutes around to others.

Randle has struggled as of late, scoring a measly five points against the Detroit Pistons over 26 minutes. He was pulled with three minutes left in the third quarter as the Knicks dropped to a double-digit deficit, but the second team stormed back and secured a win against the worst team in basketball.

Randle’s performance was coming off the back of a 13 point outing against the Minnesota Timberwolves over 38 minutes. His scoring production simply hasn’t been where the Knicks need it to be, and his defense has been problematic as well.

Over 455 minutes the season, the Knicks are outscoring opponents by 15.9 points per 100 possessions when Randle is off the floor. While a myriad of factors could skew that stat, there are plenty of other statistics that showcase Randle’s regression to the mean this season.

However, let’s take a look at a few players who should supplement the 35 minutes Randle will leave behind over the next few days.

The obvious candidate to take over for Randle is Obi Toppin. Toppin is averaging 15.7 minutes per game this season but has enjoyed over 20 on two different occasions over the past five games.

While Toppin’s three-point efficiency sits at just 21.6%, he has become the Knicks’ most lethal transition scorer and has improved his defense to a degree. He’s not going to offer the same scoring production as Randle, but he will look to pass and increase the energy levels on the floor.

Many have pointed out Randle’s lack of effort and movement this season. Toppin offers the exact opposite, so it will be interesting to see how the Knicks respond to his style of play compared to the All-Star from 2020.

Tom Thibodeau may try to use a variety of player combinations to spark production. One player who has become a young sensation for New York is Miles McBride.

McBride posted a team-high +39 +/- against the Detroit Pistons on Wednesday night but scored zero points. This might be one of the bigger basketball phenomena of the year, but it displayed just how incredible his defense is.

McBride has played 20+ minutes in each of the last three games he’s played in, and that number is set to increase with Randle out. He’s deserving of more opportunities, especially when factoring in his defensive prowess.

Lately, the Knicks have put a lot more faith in Quentin Grimes, featuring him with the starting five against Detroit. He missed all five of his shots over 13 minutes, but it seems to be an anomaly after recording double-digit point production in his previous three games. Shooting nearly 40% from three this season and also displaying great defense, averaging 1.8 steals per game, he’s a great candidate for more playing time.

Grimes offers the Knicks something that they lost with Reggie Bullock, a 3-and-D player who can get into the right spots and enjoy open looks at the basket.

Expect to see plenty more Grimes if Evan Fournier is forced to miss any time with his right ankle issue and supplement Randle with different combinations.