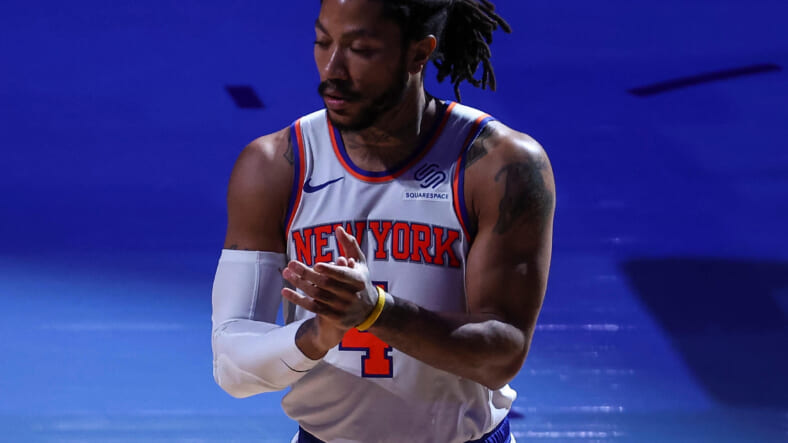 The New York Knicks will play their 2nd to last preseason game on Wednesday evening before the regular season begins on October 20 against the Boston Celtics. Trying to get their players a bit more time on the court to build chemistry is essential, especially with the additions of Evan Fournier and Kemba Walker. However, the team seems to be in solid form already, utilizing this off-season to train together and build connections.

Head coach Tom Thibodeau needs to take it easy with his starters, though, as several are coming back from injury and might be a bit vulnerable.

Three things the Knicks need to do in 2nd to last pre-season game:

Veteran PG Derrick Rose left the Knicks’ last preseason game against the Washington Wizards in the fourth quarter due to an ankle issue. After tweaking his ankle, Rose didnâ€™t seem too worried about the injury, stating that it was â€œnothing serious at all.â€

Despite his confidence, Thibodeau should be cautious with playing him in unnecessary minutes, giving that time to Immanuel Quickley and rookie Miles McBride instead.

2.) Get Nerlens Noel some action

Veterans center Nerlens Noel has yet to make an appearance during the preseason due to a knee injury heâ€™s been rehabilitating from. Noel practiced in full on Monday, so he should be prepared to take the floor and get some action in before the regular season begins in a week.

With Mitchell Robinson still fighting to get back on the court and working with his teammates, Noel will likely get a ton of early action this upcoming season, so he needs to be prepared. Noel signed a three-year, $27.7 million deal this past off-season after posting encouraging statistics in his first year with the Knicks.

Over 64 appearances, Noel averaged 2.2 blocks, 6.4 rebounds and shot 61% from the field on 3.5 attempts per game. The Knicks are hoping he can add a shooting factor to his game, evolving with the rest of the big men in the NBA.

This could be a great opportunity for Thibodeau to get the rookies more involved in case they are needed during the regular season. Against Washington, McBride enjoyed just three minutes on the floor, and Quentin Grimes earned two minutes. Both looked solid despite their small sample size, but we should expect to see more of them in the 2nd to last preseason game as the Knicks try to avoid any injuries to their primary starters.