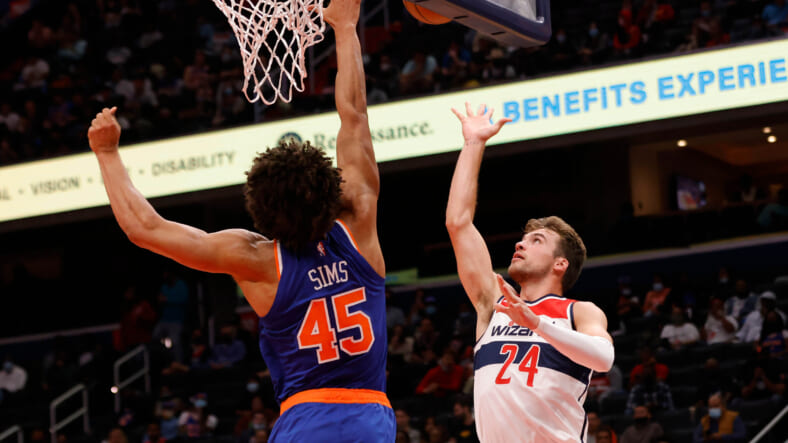 The New York Knicks overcame the Washington Wizards on Saturday evening by a score of 117â€“99. Without All-Star power forward Julius Randle, who was ruled out due to personal reasons, the Knicks featured Obi Toppin as their primary PF. Toppin recorded 13 points, eight rebounds and earned two blocked shots. He shot over 50% from the field and hit on two of six attempts from three-point range.

With another stellar preseason performance under their belts, the Knicks will take on the Detroit Pistons at MSG in their final game before the regular season commences.

Veteran PG Derrick Rose played in just 19 minutes in the win over Washington, but he posted 15 points, 8.0 assists, and four rebounds during that time. He shot 4-of-7 from the field and connected on all three of his attempts from beyond the arc. He also and 4â€“4 from the free-throw line.

Rose has started his 2021â€“22 campaign on a high note, and despite offering up the starting job to Kemba Walker, Rose projects to man the second unit, where he can make an impact while helping some of the younger guys develop.

Unfortunately, Derrick picked up a left foot injury toward the end of the game, sitting for the majority of the 4th quarter. He spoke with trainers on the bench before heading to the locker room early to try and work out the issue. Given this concern, I wouldnâ€™t expect to see Rose in the final preseason game as the Knicks prepare for an October 20 opener against the Boston Celtics.

Rookie center out of Texas, Jericho Sims, looked stellar in the victory. While he certainly has to work on his defensive spacing and positioning, he posted a game-high 13 rebounds over 26 minutes. Ten of the rebounds were defensive, and three were offensive, enjoying a few putback jams, recording seven points on the evening. He also tallied three steals, leading the team in the category.

Sims is already impressive as a rookie, and with Mitchell Robinson and Nerlens Noel dealing with individual injuries, I wouldnâ€™t be surprised to see Sims start the season on the active roster. The plan is for Jericho to continue developing with the G-League squad, as he signed a two-way contract with the team as the 58th overall pick in the 2021 NBA draft.

It is clear that Sims plays at 100% and can fill the backup center role adequately, but he has plenty left to learn, and spending time at a lower level where he can continue growing and earning minutes could be very beneficial. If any injuries arise during the season, Sims will be the first one to earn an opportunity.