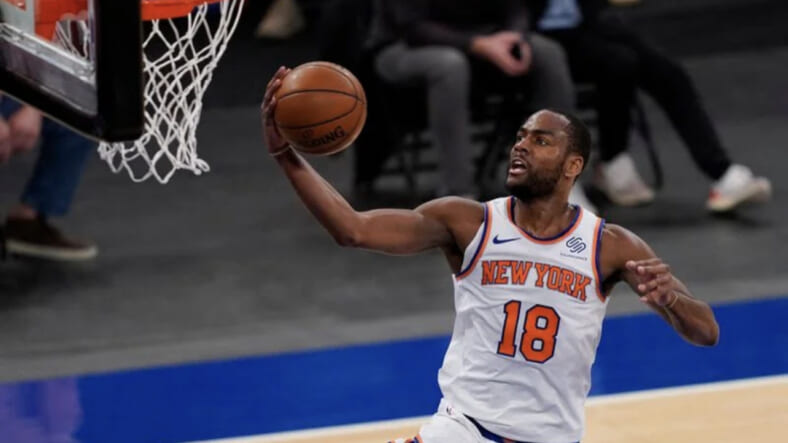 The New York Knicks emerged victorious on Saturday evening against the Houston Rockets, the worst team in the NBA. However, this wasnâ€™t the simple victory they were hoping for, clawing their way to the final minutes after blowing multiple leads and trailing for a good portion of the contest.

The Knicks have struggled lately on both sides of the ball, and their defense was spotty against a team that relied on rookie Jalen Green, Eric Gordon, and Christian Wood to handle the load. It is clear New York is still dealing with a few serious problems, winning just their fourth home game of the season.

After losing three of their last four games, it was nice to see New York finally win a game at MSG, hopefully reversing a rather disappointing trend to open the year. Their shooting was solid on the evening, connecting 42.3% from the field and 43.9% from three-point range. Julius Randle contributed 16 points and Evan Fournier 19 points, hitting 50% of his shots from deep, despite air balling a few.

Off the bench, Alec Burks posted 20 points, a season-high, shooting 6-of-7 from range and contributing five rebounds and five steals, showcasing his defensive aggression. Immanuel Quickley posted 13 points, continuing his incredible shooting, hitting 2-of-4 from three and 3-of-5 from the field.

While the Knicks did pick up a win, they were rather inconsistent throughout the game. They were outscored in the first quarter 21â€“13 and once again in the third quarter 26â€“25. They allowed nearly every starter to post double-digit points from Houston, and two of their bench players also scored 10 points apiece.

The Knicks played solid perimeter defense, holding Houston to just 25.6% from the field, but they dominated around the rim as Wood and Green combed for 10 field goals inside.

Considering the Knicks only won by seven points and barely squeaked it out at the end, this was a disappointing performance from a team that is expected to dominate clubs like Houston. The Rockets entered the game with a 1â€“14 record, and at home at MSG, Thibodeau’s squad needs to be winning these games by 20+ points.

It is clear the Knicks have a long way to go, and it starts with their defense. They were outrebounded by the Rockets 35â€“33 and especially on the offensive boards. Houston posted 13 offensive rebounds, and the Knicks recorded just four. That is a statistic that has plagued the squad all year, and one they need to find a catalyst for moving forward.