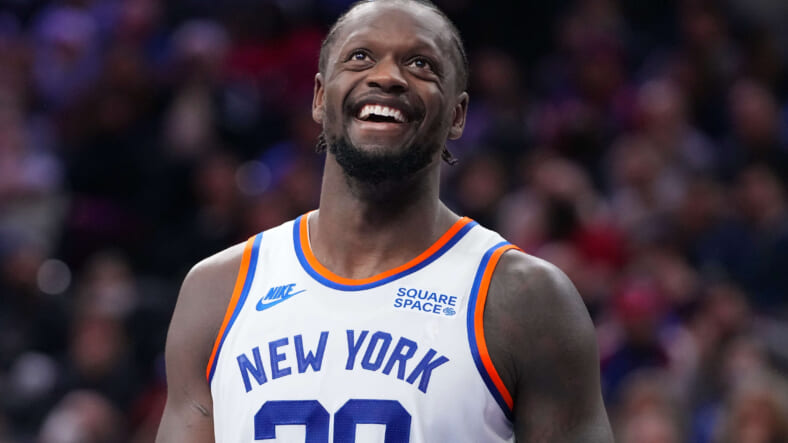 The Knicks have had trouble with hustle and effort at times this season, scoring just 14 points in the third quarter but playing good enough defense to hold Philadelphia to under 100 points. However, several essential players were out due to COVID-19 protocols, including Tobias Harris and Joel Embiid.

Three main takeaways for Knicks in win over 76ers:

1.) Julius Randle to the rescue

Without Julius Randleâ€˜s impact, the Knicks wouldâ€™ve had a far more difficult time putting away the 76ers. Randle posted 31 points, shooting 12-of-25 from the field and 5-of-10 from three-point range. He also contributed 12 rebounds and three assists. Julius absolutely dominated in the win, hitting several three-pointers down the stretch to give the Knicks a healthy lead despite Philadelphia trying to match them from range.

Randle has picked up his game over the past few contests, scoring 19 against Cleveland on Sunday and 32 against Milwaukee last Friday.

Philadelphia was the top three-point shooting team in the NBA heading into Mondayâ€™s contests, but the Knicks held them to just 32.5% after allowing a 54.3% shooting efficiency from Cleveland. Guarding the perimeter more aggressively was a catalyst in the win, and the Knicks must continue showing that type of effort moving forward, as subpar teams in the category have taken advantage of their lackluster effort.

Second-year guard Immanuel Quickley has finally found his shot after struggling to open the year, recording 10 points and three assists against Philadelphia. Quickley connected on 3-of-4 shots from deep, hitting 75%. He shot 40% from three-part range against Cleveland, his two highest marks of the season. When Quickley is knocking down shots and playing aggressive defense, the Knicks are simply a better team, so his consistency is essential as Tom Thibodeauâ€™s squad moves forward.

The Knicks will face off against the Milwaukee Bucks for the second time in four games on Wednesday evening, and they will be looking to get a bit of revenge after New York defeated them on their home court last Friday.