The One Who Got Away for the New York Knicks 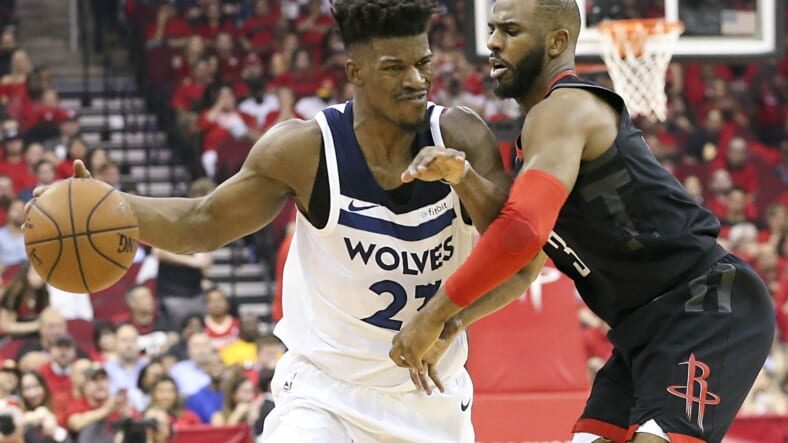 In the last offseason, most people point out how the New York Knicks lost out on Kevin Durant, Kawhi Leonard, and Kyrie Irving. While these stars would’ve helped the Knicks, how many of them would’ve changed New York culture? These stars would’ve made it exciting for a little, but after they leave things might just go back to being the same. For the Knicks landing those three should not have been the priority, because if they could’ve landed the now Miami Foward/Guard Jimmy Butler, this team would have had a massive culture change because there is no athlete on the planet who pushes his teammates and improves his teammates as much as Jimmy does.

One of Basketball’s Biggest X-Factors

While with the Timberwolves, (before Butler wanted out), the team was 37-22, being 10-13 without him. It’s not like the team was a bad team either you’d think, with KAT and Andrew Wiggins on that squad, but once Butler left that team became a tire fire. He said multiple times after leaving that they were not as focused on winning or practicing as hard as they should be. He was infuriated with them because as he put it: “”I’m not the most talented player on the team. Who is the most talented player on our team? KAT. Who is the most God-gifted player on our team? Wiggs”. In the infamous practice where he called them soft, it wasn’t wrong as those two struggled to get a winning culture in Minnesota without Butler, who went to Philly and was not happy with their work ethic.

Reports then came out this season about the 76ers not working as hard and Embid letting himself go physically, and they regressed heavily without Butler. His destination was Miami for the Heat, and he took a 33 win team and made them into a top 3 team in the Eastern Conference. Butler will push guys to their extremes because he knows that unless they outwork their opponents, they will lose. Winning comes with hard work and that type of culture change in New York would be great for the Knicks younger players, giving them some sort of hope for their season and development.

The Knicks adding Butler would’ve been perfect for RJ Barrett, who could use someone to dish him the ball for scoring opportunities instead of being reckless and averaging 13.0 attempts from the field. Butler would obviously be the primary scorer and the ball-dominant player, but with his passing abilities and ability to facilitate and run an offense would help RJ get easier looks to score from, which would be huge for New York as if RJ Barrett can blossom he could be a second option for Butler.

We could see RJ average 16 PPG on 46% from the field instead of the 14.3 with 40.2% from the field. Don’t believe this improvement is possible? Let’s look at Kendrick Nunn who was a rookie who wasn’t a first-round pick and has seen success, averaging 15.6 PPG on 44.8% from the field. While yes there are differences in these two players, what it demonstrates is an ability to facilitate on Butler’s part, as he’d have RJ and Julius Randle to help him when his first look isn’t good.

Jimmy Butler is a 4x All-Defensive player, and since 2014 only Draymond Green and Kawhi Leonard have more selections. The Knicks badly need defensive help, as their team is near the bottom in defensive rating. Butler’s ability to lock down both forwards and guards means he is versatile defensively and would’ve been very useful for the Knicks as if he’s taking pressure off of less experienced defenders then he is going to see his teammates perform better defensively.

RJ Barrett and Julius Randle often face their opponent’s best offensive player, which usually means they get torched, as they went from Fizdale’s coaching to another coach which changes everything and mind you that RJ already had to change from NCAA to NBA. This was a recipe for disaster, but the organization could’ve shown competence by bringing in Butler to help the locker room and be a motivator, and with a better record, it would make the Knicks a better team to join than they appeared in 2019.

The Knicks missed out on a team that barring a Morris trade would’ve boasted this lineup:

This lineup wouldn’t have been a knock your socks off the lineup, but it definitely makes the Knicks a lot better than 21-45. If they were to win 35 games in 2019 but show growth and promise, they could land a few more players to bolster their depth and add a better big man through drafting or free agency. The Knicks missed out on a culture change and an identity change that could’ve helped the management and front office have a base to build from, but instead, now they have a struggling RJ Barrett, a feud with Spike Lee, and an awful team.