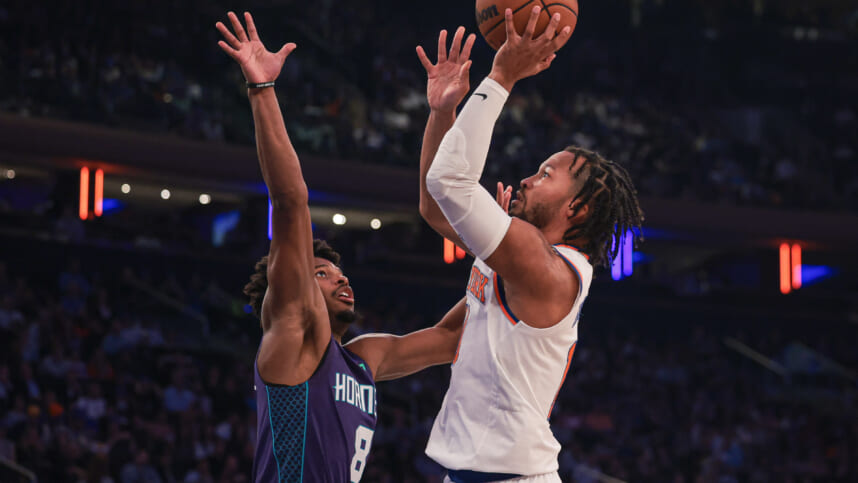 Brunson’s looks of determination has rubbed all over the Knicks as they collectively fought back from a five-point deficit in the final 2:22 of the regulation to squeeze out an ugly 134-131 overtime win over the Charlotte Hornets Wednesday night.

The Knicks improved to 3-1 overall with two tough road trips in Milwaukee and Cleveland.

In front of a sellout crowd in the finale of a three-game home stand, Brunson put on a show, carrying the brunt of the Knicks offense down the stretch.

He presided over the Knicks’ first eight points in the extra time then let Julius Randle and RJ Barret seal their third straight win.

It was their first 3-0 start at the Madison Square Garden in a decade, thanks largely to Brunson.

The 6-1 guard took the mantle of leadership after signing a $104 million deal in the offseason.

After a shaky season debut in Memphis, Brunson has since been in midseason form.

Wednesday night was his finest performance, earning him a ‘Jalen Brunson’ chants at the Garden.

“That’s who [Brunson] is. Whatever the game needs, that’s what he does.”

Brunson did everything in his power to save the Knicks. He scored a game-high 27 points and dished out a career-high 13 assists and came three rebounds short of a triple-double.

He was everything the Knicks have hoped for. And it was the ugly win Brunson had asked for since their opening night loss.

“In order for us to become a great team, we need to win the ugly games.”

Win ugly they did.

The Knicks squandered a 12-point third-quarter lead and played catchup until Brunson took matters into his own hands.

The rest of the team followed his lead.

Randle, who limped to 17 points on 19 shots saved his best for last. His layup with 19.2 seconds left provided a three-point cushion for the Knicks.

It was enough buffer as PJ Washington’s game-tying three-point attempt with 5.5 seconds left was only counted as two after his foot stepped on the line.

Then Barrett sealed the win with two clutch free throws. He was a perfect 4 for 4 at the stripes, another proof of his improved shot.

Barrett finished with 22 points on 21 field goal attempts while shadowing Gordon Hayward, who wound up with 21 on 18 shots. Former Knick Dennis Smith Jr. had 14 points and 11 assists for the Hornets who dropped to 2-2, snapping their two game winning streak on the road.

Cam Reddish finished with the starters after Evan Fournier fouled out. Reddish was solid on defense especially down the stretch to compensate for his 1 of 3 shooting night.

When the Knicks had their last 3-0 start at the Garden, Brunson was only a teenager rebounding the ball for Rose, who had been running his own team in Chicago.

A decade later, Brunson has blossomed into a leader with Rose backing him up.