How the Knicks will supplement the massive loss of Mitchell Robinson 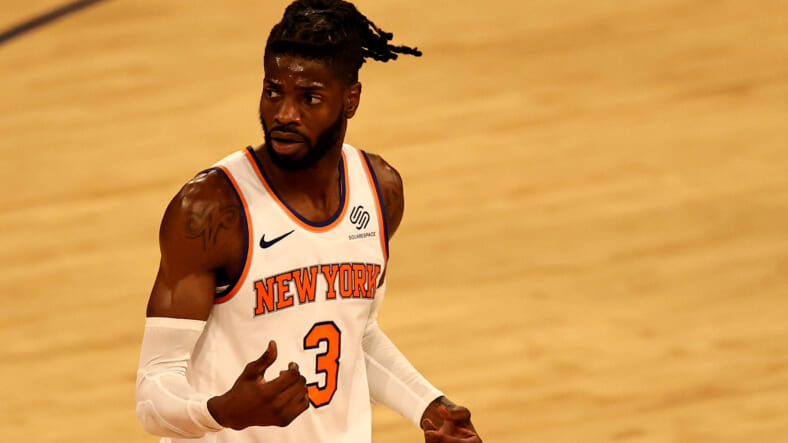 The New York Knicks are still unsure if center Mitchell Robinson will be able to return from a fractured fifth metatarsal in his right foot this season. After landing awkwardly in the Knicks’ win over the Milwaukee Bucks several days ago, there is no timetable set for Robinsonâ€™s return. In fact, thereâ€™s a solid chance he misses the remainder of the 2020-21 season, which would significantly hurt the starting five and force the team to supplement with veterans.

Before Mitchellâ€™s injury, he was averaging 8.3 points and a career-high 8.1 total rebounds, making his way back from a fractured hand injury. Clearly, this is not Robinsonâ€™s year, but luckily the Knicks have a few solid pieces to supplement his loss.

However, Robinson has one more year on his deal, a club option for the 2021 season, and it seems as if the Knicks will ride out the remainder of his rookie contract before considering an extension. There was a reason to believe that if Robinson performed well and remained healthy, he wouldâ€™ve received an extension, but clearly, that wonâ€™t be the case.

In his absence, head coach Tom Thibodeau will roll with Nerlens Noel and Taj Gibson. Noel has been phenomenal this season as a rotational piece at center, averaging 5.0 points, 6.2 rebounds, and a career-high 2.0 blocks per game. His defense has been incredible, starting more games this year than any of the previous three seasons.

Unfortunately, the Knicks were unable to lure Â Andre Drummond to New York, as he elected to take his talents to the Los Angeles Lakers. Drummond wouldâ€™ve been a phenomenal addition, but the Knicks arenâ€™t yet appealing to players looking for new teams mid-season.

In addition to Noel, Gibson also offers a strong presence on the interior. While he is past his prime at 35 years old, heâ€™s averaging 4.6 points over 19.2 minutes but is a physical rebounder and savvy veteran. The only problem with the Knicksâ€™ current plan is that both Noel and Gibson are more rotational pieces based on their age and durability.

One free-agent piece that could be worth exploring is DeMarcus Cousins, and considering his connection with Kenny Payne during his time at Kentucky, there could be an increased interest.

However, Cousins has gone into his fair share of trouble, and while he doesnâ€™t offer elite defense, he is a solid offensive piece that can provide double-digit scoring per game. At this point, New York is running out of options, and everything must be on the table.