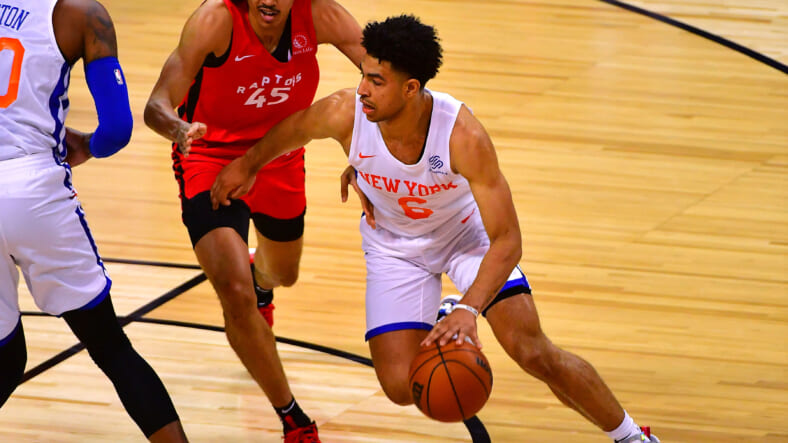 The New York Knicks have built an extremely deep roster with talent at every position, but there arenâ€™t enough minutes to go around for everybody. When it comes to the rookies, Miles McBride and Quentin Grimes, getting on the court, this upcoming season will likely be a challenge, but that doesnâ€™t mean they wonâ€™t be prepared.

Both rookies have been working diligently to improve and adapt to the NBA with the season just a week away. Ranging from their dominant performances in the Summer League to solid contributions during preseason games, the front office must be excited about their young talent and the growth they’ve experienced in just a short time.

In the most recent preseason game against the Washington Wizards, McBride spent just three minutes on the floor, picking up one assist. Grimes, on the other hand, was on the floor for just two minutes, hitting two three-point shots and totaling six points. Grimes commented on being prepared and ready to come in the game at any moment.

â€œYou have to be ready to come in and knock down shots,â€™â€™ Grimes said, via the NY Post. â€œItâ€™s definitely an adjustment â€” my first time ever coming off the bench or even sitting the first 46 minutes. You got to be locked in and watching the whole game. You canâ€™t worry about if your numberâ€™s not called.â€™â€™

Grimes mentioned that this is his first time ever coming off the bench rather than being a regular starter. It will be a good experience for him to learn from the veterans and watch before making a legitimate impact. He already has solid defensive attributes, but gaining confidence against professionals will contribute to his preparation.

Luckily, he has a disciplinary coach to help him refine his talents and take his game to the next level, where he can produce when called upon.

â€œThibs is tough but itâ€™s different in college,â€™â€™ Grimes said. â€œSampson can run us into the ground because you only play 30 games. But Thibs is tough, one of the tougher coaches Iâ€™ve had. But I like it a lot because he gives you freedom on the court as well. So I definitely like playing for him.â€™â€™

Thibodeau has only provided positive reviews of both McBride and Grimes since being drafted several months ago. Clearly, they have left a positive impression during preseason games, but both also dominated during Summer League play.

Grimes averaged 32.8 minutes over six games this summer, posting 15.3 points on 41.6% shooting from the field and 40.7% shooting from three-point range. He also picked up 6.3 rebounds and 3.0 assists per game.

â€œEverything,â€™â€™ Thibodeau said. â€œHe and Miles, they are going to be good players. It started in the summer league, fall workout and then training camp. When it comes to get in there, get the job done. Thatâ€™s what I love about both guys. Quentin went in, Miles went in right at the end of the game. Both of them played really well.â€

Based on Quentin’s development so far, I would anticipate him earning a few garbage-time minutes during the earlier portions of the season. Once fatigue starts to settle in, and injuries ultimately take hold, Grimes will be relied on more frequently, but he can use this time on the bench to watch and learn some of his more experienced teammates.