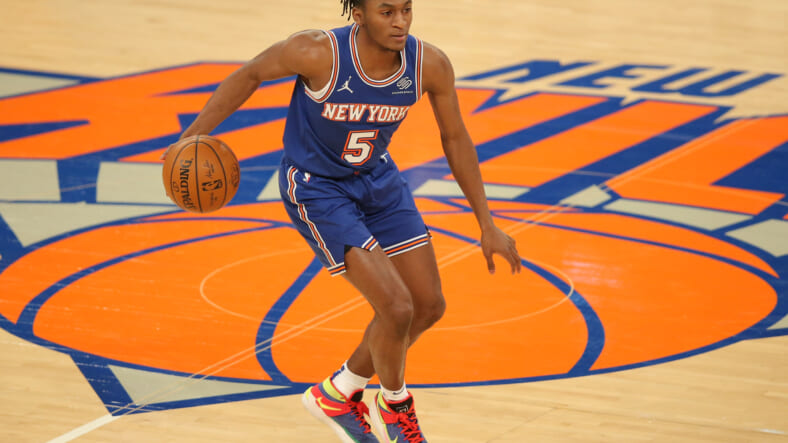 New York Knicks guard Immanuel Quickley spent two years with Kentucky before taking his talents to the NBA level. During his first season in the SEC, Quickley averaged 82.8% from the free-throw line, starting off his collegiate career on a high note. However, it wasnâ€™t until his second season with Kentucky when he really advanced with his shooting mechanics and confidence, earning a 92.3% free-throw percentage. He averaged 16.1 points that season, contributing 41.7% shooting from the field and 42.8% shooting from range.

Quickleyâ€™s development has been a process, and thereâ€™s no bigger factor in his growth and his own mother, Nitrease Quickley.

â€œItâ€™s been so commonplace that when he misses a free throw, it takes myself a couple of minutes to get myself together,â€™â€™ Nitrease said. â€œHe missed that? But the game is going on and I miss the next two minutes. But what I like about him is he doesnâ€™t allow a missed shot to stop him from being the player he is. If he misses a free throw he gets upset a second, and heâ€™ll come back on the line and here we go again.â€™â€™

One of Quickley’s biggest mentors and most consistent teachers is his mother, as he was gifted with a family lineage built on the game of basketball and competition. During his rookie season, quickly was a godsend for a team that was unable to maximize the impact of eighth overall pick, Obi Toppin. Quickley contributed 11.4 points over 19.4 minutes per game, and he impressively connected on 89% of his free-throw attempts, getting to the line 2.7 times per game.

Quickley isnâ€™t one to boast about his accomplishments and present an egotistical mentality, but rather remain quiet and build upon his talents.

â€œHeâ€™s having a lot of fun,â€™â€™ Nitrease said. â€œHeâ€™s a humble kid but someone who is working hard and fans appreciate that. When you have someone willing to work hard for the team and teammates, you canâ€™t help but gravitate to him.â€™â€™

The Knicks have been trying to find efficient ways to extract the most value from one of their prized young players, testing him at point guard during Summer League play and utilizing him as an instant score last season off the bench.
Quickley is the type of player that could win Sixth Man of the Year with a bit more development and consistency at the NBA level, and he already has a significant advantage with a strong support system behind him.